Reactions: Finn’s entrance, Rollin’s fly new gear and the newly revealed WWE Universal Championship added an extra sense of specialness to this big RAW match. When this finally got underway, we were all treated to a much-faster paced matchup that was a bit better than SmackDown’s title match. Bálor did his best to target Rollins knee, while Rollins targeted “The Demon King’s” back. Rollins pulled out all the stops, which included the return of his Small Package Driver. Bálor made sure to fight back with as much vigor as his opponent, which resulted in several Shotgun Dropkicks and his 1916 reverse DDT. The crowd was into this one as they got into dueling chants over who should become the victor. The multiple kick exchanges and the final stretch that resulted in a Coup De Grâce capped off a great match. Congrats to our new “Demonic” Universal Champion. 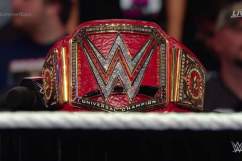 Reactions: Rusev didn’t really give a damn about properly defending his title. His concern was defending his wife’s honor, which led to him getting into a pull apart brawl with Reigns. The crowd crapped all over Reigns at first and even cheered on Rusev. Reigns son got the advantage and began laying in some punches of his own on Rusev. Rusev got the worst of it after he got taken down with chair shots. Reigns ended this whole segment after putting Rusev down with a Spear. We can tell this match wasn’t going to actually happen as soon as they started fighting. You can count on this match actually going all the way through at the next RAW PPV.

Reactions: Was this the massacre we expected it to be? It was all that and a bit more. Orton did the best he could as he took down Lesnar with a dropkick, his trusty DDT and two nice RKO’s. But it was all for naught. Lesnar went crazy on Orton with a myriad of big suplexes and two devastating F5’s. Lesnar even tapped into his MMA skills by landing a bunch of ground and pound strikes to Orton. These strikes were so fierce that Orton got busted wide open. And for the first time in a while, a match ended under TKO circumstances. Lesnar bloodied Orton, F5’d Shane McMahon and left SummerSlam 2016 as the ultimate winner. This was pretty fun to watch. It may have been a bit short for such a hyped up main event, but it was still cool to watch Lesnar in his finest form.