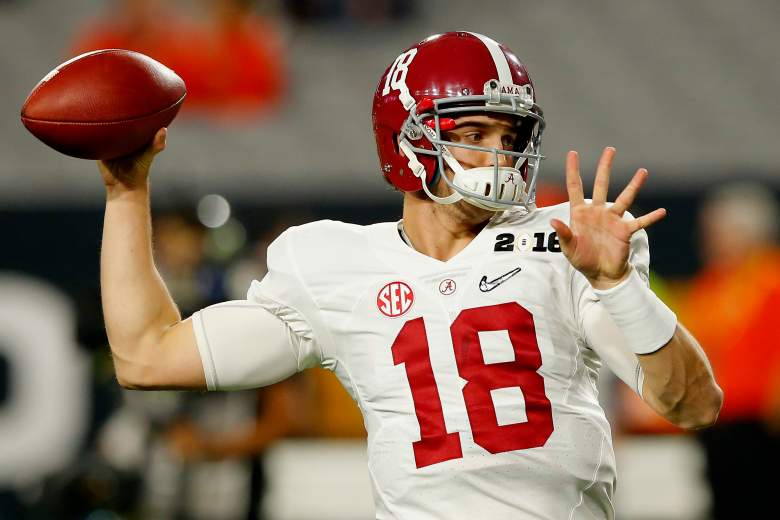 While ranked atop the preseason national polls, defending national champion Alabama has some holes to fill as they open their season against No. 20 USC Saturday night in Arlington, Texas. Heisman Trophy winner Derrick Henry is now in the NFL, and head coach Nick Saban also has to find a new quarterback as Jacob Coker has moved on as well.

Just before kickoff it was revealed that Saban has pegged 6-foot-5, 200-pound redshirt freshman Blake Barnett to be the starter, with Barnett beating out redshirt junior Cooper Bateman and true freshman Jalen Hurts for the starting nod. Yet it should be noted that Saban has played multiple quarterbacks early in the season when the race for the starting job has been tight, and Bateman played in seven games a season ago. Here’s what you need to know about Cooper Bateman, who could very well see the field Saturday night. 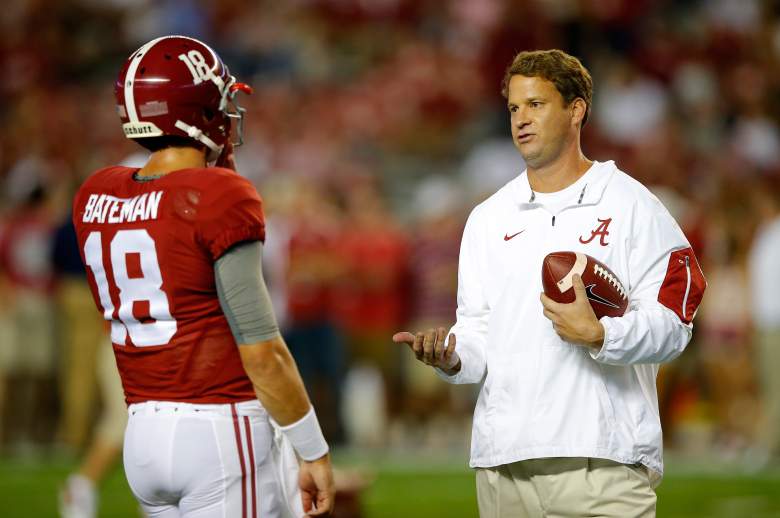 Bateman may not be the starter, but that doesn’t mean he won’t play (Getty)

1. Bateman completed just over 71 percent of his passes as a redshirt sophomore.

The Murray, Utah native saw action at quarterback in seven games last season, completing 37 of his 52 pass attempts for 291 yards and one touchdown. Bateman’s lone touchdown pass came in the Crimson Tide’s 37-10 win over Middle Tennessee September 12, as he connected with receiver Kenyan Drake to give Alabama a 30-3 lead early in the third quarter. Bateman finished the game 11-for-17 for 98 yards, with a touchdown and an interception.

The 98 passing yards in that win were the most for Bateman in a game last season, as the 11 completions were tied for the most in a game for him (Ole Miss). Of the four games in which Bateman played he attempted at least eight passes, completing no worse than 63.6 percent of his attempts in any of those outings. 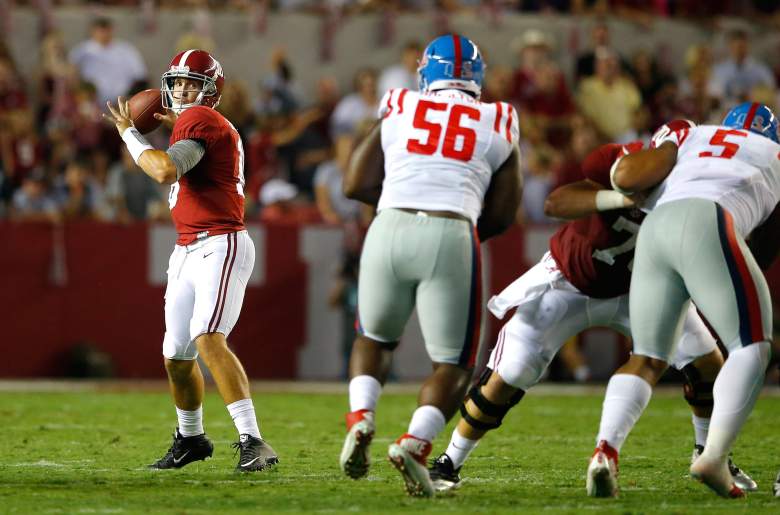 2. Bateman’s lone start at quarterback came in a home loss to Ole Miss.

Bateman completed 11 of 14 pass attempts against the Rebels, but with 87 yards and an interception he didn’t have the impact the Alabama coaching staff envisioned when naming him the starter ahead of the 43-37 defeat. Thirty of those 87 yards came on one play, as he connected with tight end O.J. Howard on the Crimson Tide’s first drive of the game. Alabama would eventually turn the ball over on downs on that drive, with Bateman’s pass to Robert Foster on 4th-and-2 from the Ole Miss 27 falling short of the line to gain.

With the Crimson Tide trailing 17-3 in the second quarter Bateman was replaced by Coker, who led Alabama to a touchdown on his first drive of the game. Alabama would trail by as much as 20 (30-10) before mounting a comeback that would ultimately fall short. That would be the Crimson Tide’s lone defeat of the 2015 campaign. 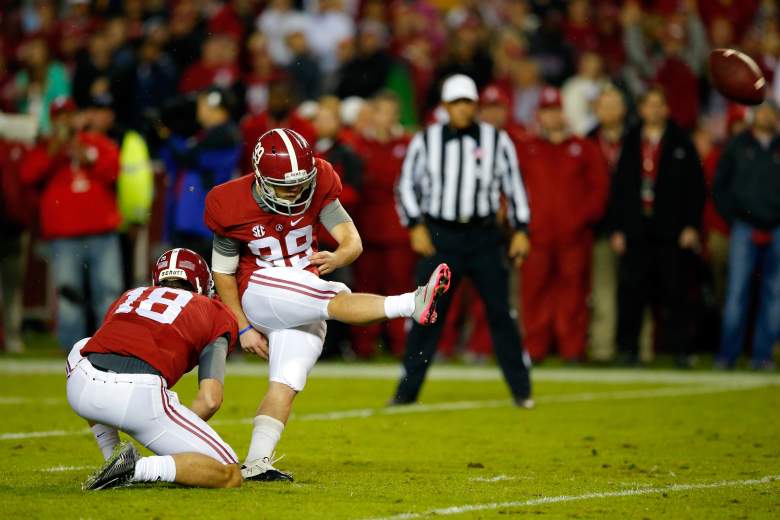 3. Bateman handled Alabama’s placeholder duties in each of the last two seasons.

While Bateman has only one start at quarterback to his credit as a member of the program, he’s been on the field plenty on special teams. After redshirting in 2013, Bateman has served as Alabama’s starting placeholder on extra points and field goals in each of the last two seasons. As a redshirt freshman in 2014 Bateman did not mishandle a single snap on a kick attempt, with 22 coming on field goals and 65 on extra points. Last season Bateman was the primary option as holder in all 15 of Alabama’s games. 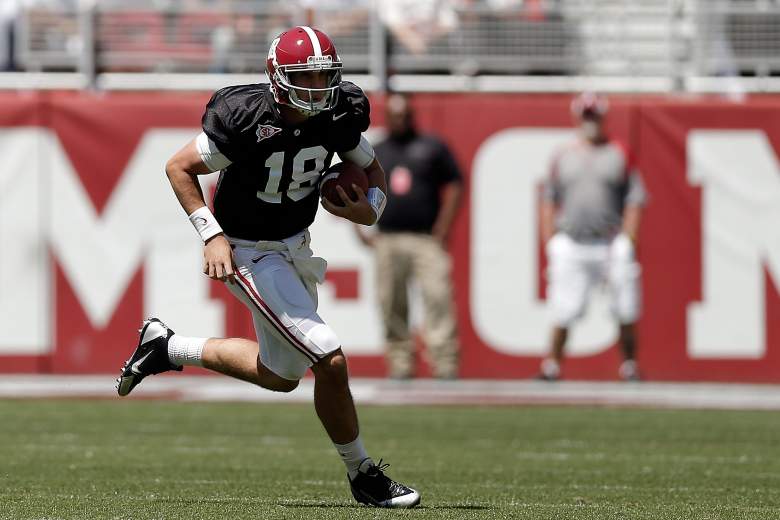 Bateman was an early enrollee in 2013 before ultimately redshirting (Getty)

4. Bateman committed to Alabama in the spring of 2012 and was an early enrollee.

Bateman chose Alabama over programs such as LSU, Auburn, Florida, Arkansas, Arizona and Washington, with many other high-level programs having offered him a scholarship as well. In total Bateman held more than 50 scholarship offers, but in the end it was the allure of Alabama and the possibility of winning national championships that won him over.

“When we visited Alabama in April,” Bateman told the Salt Lake Tribune in 2012, “the moment we drove onto campus I can honestly say I just had that feeling in my gut. I said I could really see myself being here, kind of a home away from home.” 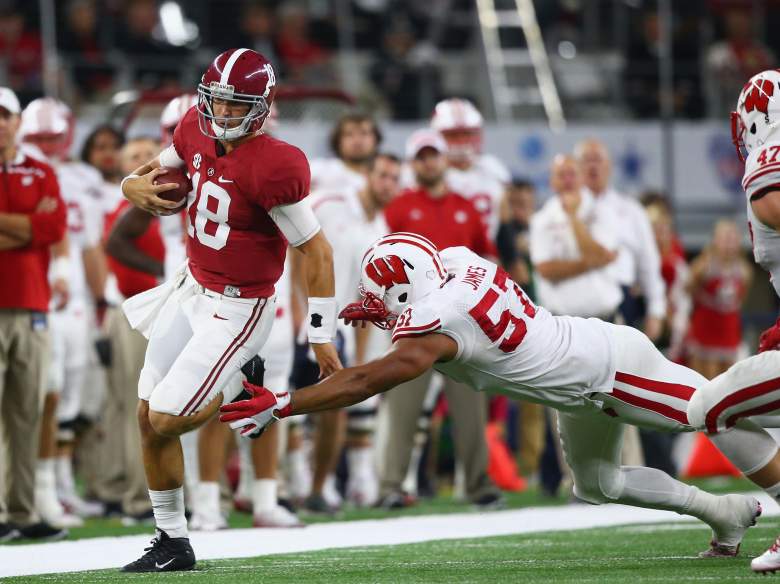 5. Bateman was rated among the top pocket/pro-style passers in the country coming out of high school.

ESPN.com rated Bateman third among pocket passers and 247Sports rated him fifth among pro-style quarterbacks in the Class of 2013. As a high school senior, Bateman was also an Under Armour All-American and a Nike Elite 11 quarterback camp participant. He was responsible for 27 total touchdowns as a senior at Cottonwood HS in Murray, Utah, with 15 being passing touchdowns and the other 12 coming on the ground.

Bateman finished his senior season ranked 44th nationally by ESPN.com, with O.J. Howard right behind him at 45th. Howard will be a favored target of Bateman’s this season, especially in the opener as the Crimson Tide look to get their new signal-caller in a good rhythm. 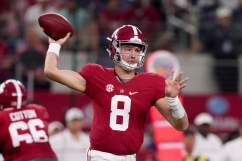