Jacoby Brissett, the third-string New England Patriots quarterback who led his team to a shutout, 27-0 victory over the Houston Texans on Thursday, suffered a thumb injury in that game that could end his season.

Here’s what you need to know — but this story is developing and will be updated regularly with new information.

1. Brissett Reportedly Tore a Ligament in His Thumb

The story was broken by Mike Petraglia, reporter for WEEI.com in Boston, who said that sources told him that the 23-year-old rookie may need surgery to “stabilize” a torn ligament in the thumb of his right hand, his throwing hand.

The television broadcast of the Thursday Night Football game from Gillette Stadium in Foxboro, Massachusetts, showed Brissett being tended to by trainers on the sidelines. Broadcast commentators Phil Simms and Jim Nance speculated that Brissett had suffered a scratch from an opposing player’s fingernail — but the injury turned out to be more severe than that.

2. Later Reports Indicate That the Injury May Not Be Serious

NFL.com reporter Ian Rapport followed up on Petraglia’s report, saying that his sources tell him that the thumb injury to Brissett may not be “serious.”

#Patriots QB Jacoby Brissett’s thumb injury is not deemed to be a serious one, source said. Will be monitored, but the team has 10 more days

3. Brissett Suffered the Injury in the 3rd Quarter

In an interview on WEEI radio Friday afternoon, Petraglia elaborated, saying that the thumb injury was “the reason for (Brisket’s) lack of accuracy” on passes late in the game. The young quarterback suffered the injury when he “banged his thumb,” Petraglia said, with eight-and-a-half minutes remaining in the third quarter.

#Patriots QB Jacoby Brissett’s thumb was bothering him on the sidelines, and @Trags said he has a torn ligament (sprain). Severity is key.

Brissett had nine passing attempts after that point — amazingly completing three of them despite the torn ligament.

4. The Patriots Would Now Have No Quarterbacks Left On Their Roster

With regular starter Tom Brady suspended for one more game over the “Deflategate” affair, second string quarterback Jimmy Garoppolo stepped in an led the team to a surprising win over the Arizona Cardinals in the season opener. But Garoppolo went down with a shoulder sprain in the second quarter of the Patriots Week Two game against the Miami Dolphins.

The Patriots played the Thursday night game with only one quarterback on their roster — but with the injury to Brissett, they now have none. But with no game until Sunday, October 2, against the Buffalo Bills, Patriots Coach Bill Belichick has time to figure out what to do.

Rapport also reported that while the Patriots are “weighing their options” on whether to subject Brissett to surgery, they are expected to sign a quarterback before the October 2 game, even though Brady is set to return on October 9 against the Cleveland Browns.

Between last Sunday and Thursday’s game, the Patriots brought in two quarterbacks for workouts, but neither was offered a contract at that point.

“[The Patriots] may need to add one to get them through their final Brady-less game,” according to the NBC-owned Pro Football Talk site.

#Patriots QB Jacoby Brissett did suffer a thumb sprain, source said. Those involved are weighing his options. Expect them to add a QB

One of those two quarterbacks was 29-year-old T.J. Yates, who in a five-year career since being picked in the fifth round of the 2011 draft by the Texans out of North Carolina, has started just seven NFL games, including two for Houston last season. In those two starts and two other appearances in 2015, Yates completed 28 of 57 pass attempts.

The other signal-caller auditioned by the Patriots was 26-year-old Sean Renfree, a seventh-round pick of the Atlanta Falcons in 2013. But the Duke University product has never started an NFL game, and has made only two game appearances with just seven pass attempts and three completions. 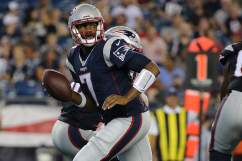