Pakistan faces T20 World Cup champions West Indies in a three-match T20 International cricket series in the United Arab Emirates starting Friday, with the hosts hoping to better their seventh place standing on the ICC T20 world rankings by taking at least two of three matches from a weakened Windies side.

Scroll to the bottom of this page for information about how stream the match live in the United States, Pakistan and India.

The Men in Green got off to a flying start on Friday, dominating their guests with a nine wicket win inside of 15 overs. Winning the toss and electing to bowl on an arid, fragmented Dubai pitch, Pakistan restricted West Indies to just 116 behind a five-wicket haul from spinner Imad Wasim — who surrendered just 14 runs in the process.

Wasim blew the West Indies batsmen away, knocking down three wickets in his first two overs. The Windies lost five wickets in the first five overs, and after that, did better than expected to build even their modest total of 115, which Pakistan chased down with 34 balls to spare.

“We just didn’t come to the party today,” West Indies skipper Carlos Brathwaite said after his team’s defeat. “We’ll have a talk about handling spin.”

Watch highlights of the first Pakistan vs. West Indies T20 International in the following video, courtesy of Willow TV.

Despite their victory in the ICC T20 Cricket World Cup earlier this year, West Indies rank only third on the world table, behind second-place India and leaders New Zealand.

But West Indies will be playing under a new captain, 28-year-old Barbados native Braithwaite, who suddenly shot to world cricket stardom when he amazingly bashed four straight sixes in the final over of the T20 World Cup final in India on April 3 with West Indies needing 19 to catch England.

Russell pulled out of the trip to the UAE due to “personal reasons.” The Jamaica native faces a hearing before his country’s anti-doping commission on September 28 after allegedly missing three doping tests in the past year, which is considered the same as a failed test.

Pakistan, on the other hand, brings back 26-year-old right-hand batsman Umar Akmal — the country’s T20 International run-scoring record holder, with 1,689 scored in the format.

West Indies will have less than 24 hours to recover after their heavy defeat, and figure out how to even the series, as the two teams go at it again on Saturday in the second game of the T20I cricket trilogy.

The Pakistan vs. West Indies T20 International cricket series in Dubai will be televised by PTV Sports, a division of the Pakistan Television Corporation. The PTV Sports Live streaming service also offers a free stream of the match for viewers in Pakistan only. That stream can be accessed by fans in that country by clicking on this link, or the link in the following tweet from PTV Sports.

To watch a free and legal live stream of the second Pakistan vs. West Indies T20 International cricket match, fans must sign up for the month-long free trial subscription to the Sling TV international sports package. The package of several international sports channels includes Willow TV, a network which specializes in cricket broadcasts, and will carry the entire West Indies vs. Pakistan tour of the UAE, which includes three T20I matches, three 50-overs One Day International contests and will be capped off by three Test matches.

Here is a look at the five major talking points of the game as Pakistan took a 1-0 lead in the series. https://t.co/IAmFPLYi4A

To sign up for the Sling TV international sports package visit this link. The subscription price is $10 per month and requires credit card information to sign up, but viewers may cancel the 30-day trial at any time before it automatically renews, meaning that the entire Pakistan vs. West Indies T20 and ODI series, as well as the first Test match, will be available to stream live legally and for free.

To watch the live stream of the Pakistan vs. West Indies T20I cricket match on mobile devices, download the Sling TV app after signing up for the free trial subscription. Many set-top devices, such as the Roku and Amazon Fire TV, also include a Sling TV channel, allowing fans to watch the cricket match live stream to their television sets.

Ten Sports is the broadcaster within India for the Pakistan vs. West Indies series. The network offers a live stream accessible to online viewers in India only. That stream can be found by clicking here. 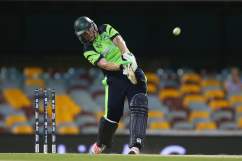