England all-rounder Ben Stokes bats in a nets session ahead of the first ODI against Bangladesh in Dhaka. (Getty)

Cricket fans looking for a live stream of what promises to be one of the most exciting One Day International series of the year — as England travel to Bangladesh to face the Tigers for the first time since one of the darkest days in England cricket and one of the brightest days for Bangladesh — can find full information about how to watch the Friday match online in Bangladesh, the United Kingdom and the United States, below.

If you have reached this page looking for live stream information for the second Bangladesh vs England ODI on Sunday, October 9, please click on the link in the following box. 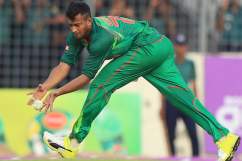 Or scroll down for a preview and team information, as well as for highlights of that memorable March 9 of 2015, when Bangladesh eliminated England from the 2015 Cricket World Cup, bowling out England to hand for a 15-run victory that sent Bangladesh to the World Cup knockout stage for the first time.

The first ODI in the three-match series gets underway at 2:30 p.m. Bangladesh Standard Time on Friday, October 7, at Shere-e-Bangla National Cricket Stadium in the Mirpur section of Dhaka. On British Summer Time, the first ball is scheduled to be bowled at 9:30 a.m..

Cricket fans in the United States will have to roll out of bed earlier than that — or never go to bed at all — to watch the live stream of the landmark match between world seventh-ranked Bangladesh and fifth-ranked England. The start time in the U.S. will be 4:30 a.m. Eastern Daylight Time, 1:30 a.m. Pacific.

How To Watch a Live Stream In Bangladesh

The first Bangladesh vs. England ODI will be broadcast by the Bangladesh-based TV network Gazi TV, which also offers a free live stream of its programming, including national cricket team action, around the clock. To access that stream in Bangladesh, but only in Bangladesh, click on this GTV official link.

In the United Kingdom and Ireland, the Bangladesh vs. England series will be broadcast on the newly introduced Sky Sports Mix channel, which means that to access a live stream, fans will need to be subscribers to Sky Sports. Sky subscribers who have not yet registered for the satellite network’s Sky Go streaming service must first fill out some basic information to obtain a Sky Go ID at this link.

Once the brief registration process has been completed, the Sky Go Sports login page can be found at this link. After that, fans are free to watch a live stream of the cricket match. Sky Go is also available on most mobile devices by downloading the Sky Go app. A full list of compatible devices can be found by clicking here.

How To Watch a Live Stream in the United States

To watch the first Bangladesh Vs. England ODI cricket match stream live, fans located in the U.S. can sign up for the seven-day free trial subscription to the Sling TV international sports package, which can be found by clicking here. A credit card will be required and a subscription will run $10 per month — but canceling before the weeklong trial is up prevents any charges, allowing fans to watch the the first Bangladesh vs England ODI, as well as the second and third, for free and legally.

The package of several international sports channels includes Willow TV, a network which specializes in cricket broadcasts, including Bangladesh vs. England cricket coverage.

Sling TV software is available for most desktop and laptop computers as well as the Apple iOS, the Android OS as well as Amazon Fire OS. The online TV service also offers a channel on several set-top boxes, including Roku, 4th Generation Apple TV, Google Chromecast and others, allowing cricket fans to watch the Bangladesh vs. England ODI on their TV screen. For a complete list of Sling-compatible devices and operating systems, click on this link.

A Series That Almost Never Happened

The England team agreed to make the trip to Bangladesh only after their security officials made a reconnaissance trip to the country and came back confident that adequate security procedures were in place. Repeated outbreaks of extremist violence capped by a brutal July terrorist attack at a cafe frequented by expats and tourists in Dhaka had stirred fears that the England team would present a target for potential terror attacks.

Security forces are a highly visible presence in and around Shere-e-Bangla National Cricket Stadium leading up to the match.

England still offered players the choice of whether to make the trip or not, and two opted out due to the terrorism fears — including skipper Eoin Morgan as well as opening batsman Alex Hales.

In addition, pacer Mark Wood is out injured, and one of the world’s top batsmen, Joe Root, is excused from the Bangladesh tour to be rested for England’s next showdown — in India. Fast bowler Chris Jordan was dropped from the squad for the ODI series in Bangladesh.

Some snapshots from Bangladesh cricket teams practice session today.Tigers will face England on 7 October in the first ODI.#BANvENG pic.twitter.com/eE7GvakJF9

The absences, as well as the need to adjust to unfamiliar conditions, have made England the underdog against their World Cup conquerors.

Bangladesh are kings in their own country, winning their last six ODI series in a row, losing only two matches along the way, with all of those series have been played on their home ground.

“I don’t think no one has to prove anything here. But in each of our series, if you think about our situation we are playing well. If we think about holding onto our good form then every series is important for us,” Bangladesh ODI skipper Mashrafe Mortaza said on Thursday. “This is just another new series and we are very excited. If we can play well and win, it will feel really good.”

England fans may want to skip the following video, but fans of the Bangladesh Tigers will certainly enjoy revisiting what still stands as the most memorable victory in the country’s history, their World Cup win over England last year.

Team News for the First ODI

Bangladesh continue to miss their 21-year-old bowling sensation Mustafizur Rahman as he recovers from a shoulder injury that has bothered him since early in the year and caused him to miss the inaugural Pakistan Super League in February as well as to cut short his stint with English county side Sussex in June. But Mashrafe brings pacer Al-Amin Hossain back into the squad.

England will see the return of James Vince to the 14-man roster, while 21-year-old Northants batsman hopes to get his first ODI cap, possibly selected to fill in for Root in the three of four spot in the England batting order.

Here are the expected teams for the first Bangladesh vs. England ODI. 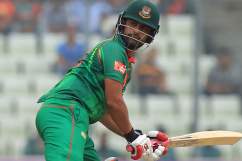 Bangladesh Vs. Afghanistan Cricket Live Stream: How To Watch Online