A press conference to announce the cancellation was held shortly after 3:30 p.m. Eastern Daylight time, and can be viewed in the video above.

The game had been set to be played at Ben Hill Griffin Stadium, better known as “The Swamp,” on the Florida Gators campus in Gainesville. But with Hurricane Matthew bearing down on the state, the University of Florida came under pressure to move the game out of harm’s way, most likely to Tigers Stadium in Baton Rouge, with even Louisiana’s United States Senator David Vitter getting in on the act.

A decision to switch the site of the game to LSU would have needed to have been made by the end of Wednesday, to give the university adequate time to prepare to host a major college football game on a weekend when it was not expecting to do so, according to LSU President F. King Alexander.

The game was scheduled for noon on Saturday in Gainesville, which is directly in the predicted path of the Category Four hurricane, which may carry winds up to 140 miles per hour.

Despite the Category Four hurricane about to rip through Florida on Thursday, the University of Florida refused to relocate the game, or even — until Thursday afternoon — make a decision on whether it would be played.

But on Thursday, Southeastern Conference officials said that the Gators could not safely okay the game at home, nor be assured that travel to Louisiana would be safe, either.

“We had a very productive phone call today with a great spirit of cooperation between the universities’ presidents and athletics directors and it became clear that the University of Florida could neither host nor travel to a game this weekend considering the circumstances,” SEC Commissioner Greg Sankey said in a written statement. “The developments of the hurricane in the last 24 hours, the projected magnitude of its impact and the unknown aftermath of this storm have resulted in this decision to seek another date to play the LSU-Florida game. We have to be sensitive to the possible imminent disruption to the state of Florida and in particular the Gainesville and surrounding area.”

Though the LSU sports news site Tiger Rag said it had a source who declared that there was “zero chance” that the LSU vs. Florida game would be rescheduled, the SEC was looking for a way to get the game in, according to KLFY TV News.

But the teams have no open dates in common on their respective schedules, increasing the difficulty of getting the game in at some point during the season.

@LSUBeatTweet but our administration wants out of this game every year

Unconfirmed reports that LSU had offered to host the game, including from the sports anchor of Louisiana TV station WAFB, led to anger among fans of the two teams.

#LSU offered to play Sat/Sunday/Monday either in Baton Rouge or Gainesville. #LSU had secured hotels in BR + NOLA. Even offered #LSU plane.

I feel that the Gators knew Oct 3rd they wasn't going to move the game. We put a ton of pressure on them to respond today!

Shortly before the decision to call off the Saturday contest came down, Florida and LSU fans were tantalized by a Twitter posting claiming that the game had been relocated to Tallahassee, home of Florida’s in-state rivals, the Florida State Seminoles.

BREAKING: multiple sources confirm Florida vs LSU has been moved to Doak Campbell Stadium for Saturday at 3:30 est #LSUvsUF

But that tweet was quickly exposed as a hoax.

Classes at the University of Florida were also cancelled starting at 3 p.m. on Thursday, allowing students and faculty to prepare for Hurricane Matthew. 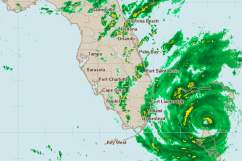