Noah Syndergaard, a 24-year-old right-hander from Mansfield, Texas, in his second Major League Baseball season, will have the playoff hopes of the New York Mets riding on his powerful shoulders Wednesday, when last year’s National League Champions host the San Francisco Giants in the 2016 NL Wild Card game. Syndergaard, who pitched and won Game Three of the 2015 World Series — the only game the Mets won against the eventual champion Kansas City Royals — emerged as the clear ace of the Mets’ starting rotation in 2016, posting a 14-9 record with a 2.60 ERA, while fanning 218 to average 10.7 strikeouts per nine inning, while walking only 43 for a strikeout-to-walk ratio of 5.07.

Here’s what else you need to know about the rising superstar who answers to the nickname “Thor.”

He Is the Hardest-Throwing Starting Pitcher in Baseball

Two of my favorite things. Squats on squats today at the iron paradise @originalmetroflexgym @jailhousestrong

In 2016, no starting pitcher threw the ball faster over the course of the season than Syndergaard. According to MLB.com’s Statcast, Synedrgaard’s four-seam fastball averaged 98.3 miles per hour this season, the fifth-fastest of any any big league pitcher, while his sinker clocked at an average of 98. That gave Syndergaard the fifth and eighth highest-velocity pitches in the Majors.

But the four pitchers who threw a faster average fastball than Syndergaard were all relievers, making shorter appearances and hurling far fewer pitches overall. In fact, Syndergaard threw 2,935 pitches in the 2016 regular season, 45th-most in baseball. That’s more than three times as many as reliever Aroldis Chapman, who averaged an MLB-best 100.9 miles per hour on his fastball over his 935 pitches, 768 of which were four-seamers.

Arguably, that makes the six-foot-six-inch tall, 240-pound Syndergaard the strongest and most durable pitcher in baseball.

2. His Contract With the Mets is a Bargain

The Toronto Blue Jays picked Syndergaard in the first supplemental round of the 2010 amateur draft, 38th overall, signing him for a relatively inexpensive $600,000 bonus out of Mansfield Legacy High School in Texas.

By the 2012 season, Syndergaard was the top pitching prospect in the Blue Jays’ organization, but the Toronto team decided on a “win now” approach, rather than waiting for Syndergaard and other top minor leaguers to mature. They traded him that December to the Mets in a multiplayer deal for knuckleballer R.A. Dickey, who had won the NL Cy Young Award that season.

Last season, Syndergaard made his Major League debt on May 12 and went on to place fourth in NL Rookie of the year voting.

But as a young player, the Mets have Syndergaard on a cost-controlled contract until he becomes eligible for arbitration after the 2018 season. In 2016, his salary was just $535,375, slightly over the Major League minimum of $507,500.

3. He Has No Brothers or Sisters

Noah is the only child of Brad and Heidi Syndergaard, parents who pushed him to be an achiever from an early age, and not only on the baseball field.

“If I made a ‘B’ in a class, I was pretty afraid to come home sometimes,” Syndergaard said in a New York Daily News interview.

At the same time, it was his mother who pushed him to play baseball, starting when he was seven years old.

“I didn’t want to play the first year or the second year,” he told the Daily News. “I remember arguing with her. Thank goodness she made me stick with it. Maybe she saw something in me.”

But Syndergaard didn’t start to show potential to be a pro athlete until he experienced a sudden growth spurt of about five inches between his junior and senior years of high school. At the same time, the teenage Syndergaard started hitting the weight room, packing on muscle and elevating his pitch velocity from the 80s — good for a high school hurler — into the 90s, making him a genuine pro prospect.

While in Las Vegas, Conforto's roommate Noah Syndergaard kept an eye on his stuff & drove his car. https://t.co/5I8jbUfqws

While Syndergaard would certainly rank as one of New York City’s most desirable bachelors, his relationship status remains uncertain. Rumors linked him to 22-year-old New Jersey native Ellen Kramer after a reported breakup from Texas girlfriend Samantha Van Veen, a 2014 graduate of Texas A&M University.

But one current relationship is well-known. That would be Syndergaard’s roommate, and teammate, Michael Conforto. The 23-year-old outfielder was considered the Mets’ top prospect before he was called up to the Majors in July of 2015 — only a year after the Mets drafted Conforto with their first-round pick, 10th overall, out of Oregon State University.

“[Syndergaard] texted me in the offseason and asked if I wanted to live with him, and I was thinking about doing the same thing, anyway,” Conforto told The New York Post. “I was going to text him, but he beat me to the punch, so we looked around a little bit and ended up choosing to stay in the place that I stayed toward the end of last year.”

The pair told the Post that they rarely discuss baseball at home, where they just “chill out” and have become big Game of Thrones fans. But Conforto says that Synergaard makes a great roommate because he’s not at home much.

“He likes to get out — he’s usually gone by the time I’m up in the morning. He’s out getting his juices or trying out new restaurants, so he’s all over the place,” the Mets outfielder said.

5. He is Not the First ‘Thor’ His Family

Owing largely to his flowing blonde hair that he has grown past his shoulders, as well as his comic-book superhero physique, Syndergaard earned the nickname “Thor,” after the mythical Norse god who is better known to the modern world as a Marvel Comics superhero, in both comic books and blockbuster movies.

And the pitcher, known for what friends call his goofy sense of humor, has embraced the persona, even walking the streets of New York in a Thor costume, as part of a stunt for SNY, the Mets cable TV network.

“We had Thor before Noah became Thor,’’ Heidi told The New York Post. “His name was Thor when we found him at the ASPCA. He’s mostly an Aussie, but he’s a mutt. They told us his name was Thor and we took one look at him and said, ‘That’s our dog.’” 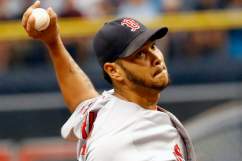 Red Sox Strikeout Record: Why Was 21 in 9 Innings Not Counted as a New Record?