The Pakistan national cricket team look for their sixth straight win over West Indies across two formats, and fans who want to watch a live stream of the third One Day International of the three-match series between the two nations can find full information below on how to watch online in Pakistan, the United States and India, without a cable login, for free.

Or scroll down the page for a preview of the 3rd Pakistan vs. West Indies ODI match, video highlights of Pakistan’s convincing win in the second ODI, and the projected teams for the final meeting before the two teams begin another three-match series, this time in the Test match format, to conclude the tour of the United Arab Emirates.

338 too much for West Indies as Pakistan seal a 59 run victory and go 2-0 up in the ODI series #PAKvWI pic.twitter.com/jD1G2Egat1

First ball of the third ODI is scheduled to be bowled at 3 p.m. Gulf Standard Time on Wednesday, October 5, at Sheikh Zayed Cricket Stadium in Abu Dhabi, United Arab Emirates. For fans in Pakistan, that start time will be 4 p.m., and in India the game gets underway at 4:30 p.m.

Fans in the United States will need to be early risers to watch the third Pakistan vs. West Indies ODI match live stream. The match starts at 7 a.m. Eastern Daylight Time in the U.S.A., 4 a.m. Pacific.

PTV Sports, which is part of the government-run Pakistan Television Corporation, will air the third Pakistan vs. West Indies ODI match live on Pakistan television. The PTV Sports Live streaming service will make a free live stream of the match available as well — but only for viewers inside of Pakistan. The PTV stream can be accessed by fans with internet IP addresses in that country, with no login information required, by clicking on this link — or this link via YouTube. Again, note that the PTV Sports live stream will not be accessible to viewers accessing the internet outside of Pakistan.

In India, Ten Sports network airs the third Pakistan vs. West Indies ODI with online live stream to go along with the over the air broadcast. Similar to the stream in Pakistan, the Ten Sports free live stream is accessible only to online viewers with IP addresses within India. That stream can be found by clicking here. The live stream is free, but does require a brief registration on the site, which is also free.

To watch a free and legal live stream of the third Pakistan vs. West Indies ODI cricket match, fans in the U.S. will need to sign up for a week-long free trial subscription to the Sling TV international sports package, which may be accessed at this link. Credit card info will be required and the subscription price for the package is $10 per month — but canceling before the initial weeklong trial is up prevents any charges, allowing fans to watch the third Pakistan vs. West Indies ODI for free, legally — as well as the three-match Test series starting October 13.

The Sling TV lineup of several international sports channels includes Willow TV, a network which specializes in cricket broadcasts. Willow will carry the entire Pakistan vs. West Indies tour of the UAE.

Once fans have signed up for the Sling TV package free trial, the next step is to download Sling software (instructions on the Sling TV site at the link above) for desktop computers — as well as for a variety of mobile devices.

Sling TV is available for the Apple iOS, the Android OS as well as Amazon Fire OS. The online TV service also offers a channel on several set-top boxes, including Roku, 4th Generation Apple TV, Google Chromecast and others, allowing cricket enthusiasts to watch the Pakistan vs. West Indies second ODI on their TV screens. For a complete list of Sling-compatible devices and operating systems, click on this link.

Pakistan vs West Indies 3rd ODI: Will any batsman score a century in this match? pic.twitter.com/lGdXJtZEuw

With this victory Pakistan becomes the 2nd side with most ODI wins ahead of India.
Well-done Guys#PAKvWI #PAKvsWI pic.twitter.com/B9oFvQXBgc

Behind controversial Captain Azhar Ali, Pakistan stand one win away from moving up to the eighth spot in the ICC world ODI rankings, the last spot guaranteed to gain automatic qualification for the 2019 Cricket World Cup in England. Of course, Pakistan would have to hold that position, or move up, until the end of September of next year.

That might prove difficult, however considering that Pakistan have only five more ODI matches on the schedule in that time, all five of them in Australia against the reigning World Cup champions and world’s top-ranked team.

But first, Pakistan must register a sixth straight victory over West Indies on the current UAE tour. Pakistan opened the tour by blanking West Indies 3-0 in the T20 format — a noteworthy accomplishment given that the Windies are the current T20 World Cup champions.

Not only that, but West Indies was coming off a victory in an August two-match T20 series win over India that was held in Florida. Of course, the second of those two matches was washed out by the south Florida rains, but the win was seen as affirmation of West Indies status as a world power in the T20 game. But that elation was crushed by Pakistan.

Pakistan will certainly be looking for more from their skipper, who was dismissed leg before wicket by his West Indies opposite number Jason Holder for only nine runs in the second ODI. The crowd in Sharjah, site of that match, let out an audible cheer when Ali was dismissed — and not because they were all West Indies fans.

“It takes time to improve things,” Ali said last week. “You need patience to lift a team. We started the rebuilding process after the 2015 World Cup and it takes one-and-a-half to two years, so we are going towards that.”

Will Babar Azam make it a clean sweep of hundreds in the #PakvWI ODI Series, with a third on Wednesday? PREVIEW – https://t.co/7CCTofRLbP

Babar Azam will be chasing his third consecutive 100 in the third ODI, after putting 123 runs on the scoreboard in the second match.

Pakistan will be missing pacer Mohammad Amir, who has left the team to attend to his mother, who is ill. Amir is expected back in time for the first Test match, which will be a pink-ball, day-night affair in Dubai.

Watch the best moments from Pakistan’s 59-run victory over West Indies in Sharjah on Sunday, courtesy of Willow TV.

Here Are the Projected Teams for the Third ODI

Rabat Ali is expected to step in for the absent Amir, while Evin Lewis may see action at the top of the order for West Indies. 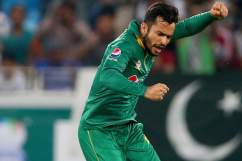