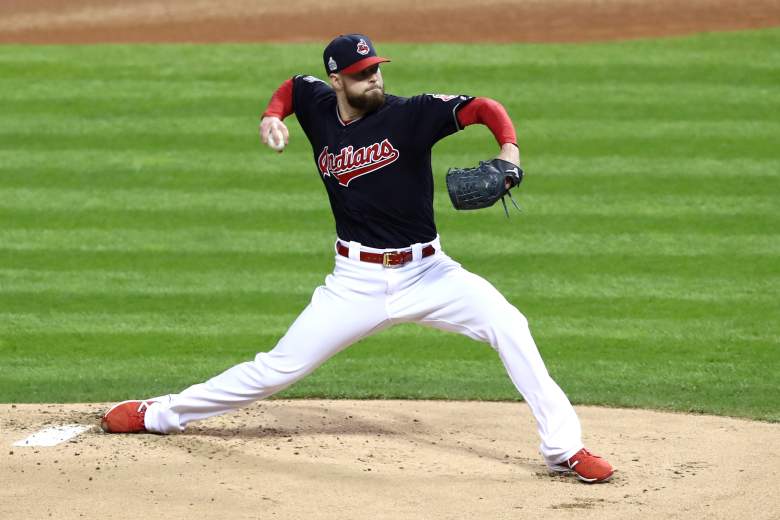 The Cleveland Indians used dominant pitching and timely hitting to score a 6-0 win over the Chicago Cubs in Game 1 of the World Series on Tuesday night at Progressive Field. It marks the team’s second straight shutout in postseason play.

Cleveland got off to a fast start with two runs against Jon Lester in the bottom of the first. Their offense was backed by an impressive performance by Corey Kluber on the mound. The ace right-hander finished the night with nine strikeouts, no walks, and six shutout innings.

It was also a big night for catcher Roberto Perez, who notched two home runs to help the Indians cruise to victory. He hit a solo homer in the fourth inning, and a 3-run shot in the eighth.

Historically, the winner of Game 1 goes on to take the whole series 64.1 percent of the time. The Cubs will look to even the series on Wednesday when Jake Arrieta goes up against Cleveland’s Trevor Bauer. Due to rain anticipated Wednesday night, Major League Baseball moved up the start time for Game 2, with the first pitch expected at 7:08 p.m. Eastern.

Corey Kluber cruised through a 13-pitch, one-two-three first inning as Anthony Rizzo was the only Cubs hitter to put the ball into play with a pop out to Jose Ramirez.

Cleveland’s Francisco Lindor notched the first hit of the game, and two pitches later, he stole second. Ramirez came up with an RBI infield single for the 1-0 lead over the Cubs in the bottom of the first. Cubs’ ace Jon Lester hit Brandon Guyer with the bases loaded and the Indians quickly nabbed a 2-0 lead in the first.

Ben Zobrist hit a double at the top of the second, which marked his twelfth double in his last 27 postseason games. However, the Cubs couldn’t get their bats going. After allowing Zobrist’s leadoff double, Kluber struck out the next three batters.

Kluber continued his dominance on the mound, and made World Series history as the first pitcher to strike out eight in three innings.

Kyle Schwarber’s impressive comeback has been a big story entering Game 1. However, it became even better when he doubled off the wall with one out in the inning. Schwarber just missed a home run.

It was the first inning of the game that Kluber did not record a strikeout.

In the bottom of the fourth, Roberto Perez hit a solo home run to give the Indians a 3-0 lead over the Cubs. The catcher only had three home runs in 153 at-bats during the regular season, and batted .183.

After going a half-inning without recording a strikeout, Kluber settled back in by striking out Chris Coghlan to start the fifth. Addison Russell hit a fly ball out to center and David Ross lined out to first.

Kluber is at 73 pitches through five innings.

Cleveland’s Jose Ramirez drove in a leadoff double. Jon Lester recovered from the double to strike out Brandon Guyer. Lonnie Chisenhall hit a fly ball. Joe Maddon then took Lester from the game in favor of reliever Pedro Strop.

The Chicago Cubs had a chance to rally in the seventh. After Ben Zobrist hit a leadoff single, Andrew Miller replaced Kluber on the mound. Miller walked Kyle Schwarber on six pitches, which brought the tying run to the plate. Javier Baez singled to load the bases, and then Willson Contreras hit a pop-fly to Rajai Davis, who made the catch in center. Davis didn’t notice Schwarber was almost to third base and could’ve doubled him off second base, and threw to home instead.

Miller settled in to strike out Addison Russell and David Ross.

Cubs’ Travis Wood took the mound with one out in the bottom of the seventh. After Jason Kipnis grounded out, Wood was pulled in favor of Justin Grimm.

Miller worked out of another jam in the top of the eighth. He walked Kris Bryant before Ben Zobrist singled. But he managed to get out of it by striking out Kyle Schwarber.

In the bottom of the eighth, Brandon Guyer walked and Lonnie Chisenhall singled off Grimm. Joe Maddon went back to his bullpen and placed Hector Rondon in the game. However, Rondon couldn’t slow down Cleveland. Perez, who homered in the fourth inning against Jon Lester, went deep again to increase the Cubs lead to 6-0.

Perez is the first catcher to hit two home runs in a World Series game since Gary Carter in 1986.

Miller came out in favor of Cleveland’s closer, Cody Allen who allowed a double but then retired the other three batters to close it in the ninth.

The Chicago Cubs and Cleveland Indians enter Game 1 of the World Series on Wednesday with two of the longest championship droughts. The Cubs last won in 1908, and they’re in their first World Series since ’45. The Indians, on the other hand, last won in 1948.

“That city’s hungry for championships,’’ Cubs utilityman Ben Zobrist told USA Today. “They won one in basketball this year and they would love to do nothing more than to win one in baseball too. We know we have our work cut out for us. They’ve played really well in the postseason so far and they have a really good team. So do we. It’s going to be a fun matchup.’’

The Cubs enter the World Series as heavy favorites. A large reason why is they boast one of the deepest rotations which features reigning NL Cy Young winner Jake Arrieta, and two strong Cy Young Award candidates Jon Lester and Kyle Hendricks.

Chicago is expected to start Lester in Game 1 who is coming off regular rest. The left-handed pitcher’s postseason record is 2-1 with a 0.86 ERA. Lester will likely be followed by Jake Arrieta, Hendricks and John Lackey.

Cleveland, which clinched the ALCS on October 19, will start ace Corey Kluber in Game 1. The right-hander is 2-1 with a 0.98 ERA in his first postseason.

The Cubs have out-homered their opponents 12 to 4 in the postseason, the Indians 11 to 5.

Historically, the winner of Game 1 goes on to take the whole series 64.1 percent of the time. Check back for live updates throughout the game, which begins at 8:00 p.m. ET. 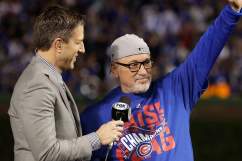 Find out how to watch the World Series in Spanish at AhoraMismo.com: