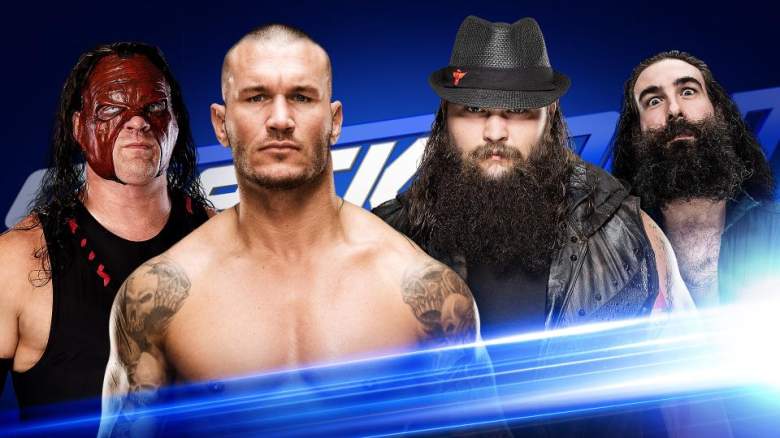 Tonight on SmackDown Live, the aftermath of Sunday’s No Mercy pay-per-view must be dealt with. Luke Harper is back and scheduled to fight alongside Bray Wyatt against Randy Orton and Kane. Plus, Dolph Ziggler makes his debut as Intercontinental Champion, and AJ Styles is still the champ that runs the camp. The show will be broadcast live at 8:00 p.m. Eastern Time from San Jose, California. Read on for results and spoilers, followed by a preview of the night’s events written earlier today.

8:00 – Dolph Ziggler enters, holding up the Intercontinental Championship belt and shouting, “We did it!” He said he really didn’t know if he’d be here tonight and if No Mercy was the last time he’d be in the ring. In fact, he did briefly doubt whether he still had what it takes, but he knew the minute he began the match that this is where he belongs.

The Miz enters. He and Maryse are dressed in all black, and he says he’s here to mourn the death of the Intercontinental Championship. Miz says he was the one to bring the prestige back to the title, and now its legacy is destroyed by the mediocrity of Ziggler. But the title is just with Ziggler temporarily, and Miz compares this to act two of a three act film, the Empire Strikes Back of the story. Ziggler replays the clip from No Mercy where the Miz looks incredibly upset at the end of the match, and Miz says this isn’t funny; he takes this very seriously. He’s not done with Ziggler, and neither is The Spirit Squad.

8:31 – Naomi defeats Carmella. Before the match even starts, Carmella attacks Naomi. Then, in the middle of the match, Nikki Bella runs out wanting to go after Carmella. She’s held back by the referees, but the distraction allows Naomi to score the victory. Carmella and Nikki Bella brawl afterwards, which ends when Carmella flees backstage.

8:42 – Backstage, Alexa Bliss says she only lost to Naomi because she wasn’t prepared to face her; she can beat her any day of the week. Daniel Bryan hears that and decides to take her up on it, booking a match between Bliss and Naomi for next week’s SmackDown Live.

8:49 – Jimmy Uso defeats Chad Gable, but only because Jey Uso holds up Jimmy from outside the ring, giving him enough support to land the pin.

8:53 – Backstage, The Hype Bros talk about wanting to go after the SmackDown Tag Team Titles. The Ascension come out and stare them down.

8:58 – AJ Styles enters. He declares that the champ is here, bragging that he beat John Cena and Dean Ambrose at the same time. He then calls the audience a bunch of losers, saying “there’s only room for one on this bandwagon” and telling them to all go cheer for John Cena or Dean Ambrose. Addressing gripes people might have with the way he won, he says that winners find a way to win. Because SmackDown Live is a land of opportunity, he’s going to give someone an opportunity tonight.

Dean Ambrose enters, clearly not the man Styles expected to enter. Styles tells him to get out of here. Ambrose says that Styles likes the easy way out, pointing to the fact that he tapped out on Sunday. He adds that he’s not done with Styles by a long shot, and there’s no one else on the roster jumping him in line. That’s fine, Styles says, because his challenger isn’t on the roster.

James Ellsworth enters. Styles reminds us that Daniel Bryan assigned Ellsworth to be his tag team partner a month ago, but that was ruined by The Miz. Now, AJ Styles says that Ellsworth will be given the opportunity to face him in a non-title match.

Daniel Bryan enters, saying that he makes the matches, not AJ Styles. But luckily, Bryan says, he’s a huge James Ellsworth fan, so the Ellsworth vs. Styles match is going to happen right now. Oh, and Dean Ambrose will be the special guest referee.

9:09 – James Ellsworth defeats AJ Styles (seriously). Dean Ambrose, serving as referee, continuously stops AJ Styles from performing perfectly legal moves, and at one point he even trips Styles and allows Ellsworth to nearly win. Later, Ellsworth tries to tap out, but Ambrose does not call the match because he’s on the phone. Finally, Ambrose flat out refuses to count Ellsworth out, and so an angered Styles goes after Ambrose. Ambrose defends himself, and while Styles is lying injured, Ambrose places Ellsworth over Styles, resulting in the victory.

9:22 – Backstage, Randy Orton convinces Kane to form an alliance with him.

9:31 – Backstage, AJ Styles takes out his anger on Daniel Bryan. Shane McMahon tells him to calm down and makes clear that AJ Styles officially lost to James Ellsworth. Styles says he’s going to have to take things into his own hands.

9:38 – Bray Wyatt and Luke Harper enter. Luke Harper says that this world has put him to sleep, but now he is wide awake and has seen the light. Bray Wyatt tells Randy Orton to bring on his monster, because Wyatt brought his.

9:46 – Bray Wyatt and Luke Harper defeat Kane and Randy Orton. During the match, Orton goes particularly brutal on Wyatt, who at one point begs Orton to stop. But when both Wyatt and Orton have the wind knocked out of them, and when Orton is about to tag in Kane, the lights go out, and when they return, Luke Harrper is standing in Kane’s place. Orton is confused, and he’s attacked by Wyatt from behind.

The No Mercy pay-per-view on Sunday ended with the return of Luke Harper, who appeared in the final moments of the match between Randy Orton and Bray Wyatt. Harper’s return helped Wyatt score a victory against The Viper, and according to WWE.com, Randy Orton will now enlist the help of Kane to take down Wyatt and Harper. Will Orton be able to score a victory and have his revenge? And what will Luke Harper have to say about his return?

Plus, Dolph Ziggler is still employed! He did not need to give up his career after No Mercy, as he defeated The Miz to become the Intercontinental Champion. The Miz’s never-ending world tour has come to an end. On tonight’s show, Ziggler will address the WWE universe, and if his reaction at the end of the No Mercy match was any indication, The Miz will be quite heartbroken.

AJ Styles is also still the World Champion after scoring a victory against John Cena and Dean Ambrose in the triple threat match. Where does John Cena go from here? He was defeated by Styles at SummerSlam, and after that match, Cena ditched his “never give up” armband and completely disappeared for a month. He returned in order to challenge Styles once again, and once again he lost. What’s the future for the so-called face that runs the place? Will Cena and Ambrose contest the result of the match, pointing to the fact that they both got Styles to tap out?

In the women’s division, Becky Lynch is still away due to an unspecific injury, so the company must come up with something for Alexa Bliss to do for the next month until she can challenge the Irish Lass Kicker in November. Based on No Mercy, it seems that a feud with Naomi is likely. Oh, and after several weeks of delivering facts about himself between segments, Curt Hawkins will finally have a match. It all goes down tonight at 8:00 on the USA Network.