With there being 11 games on the NBA schedule for Saturday, FanDuel players won't lack for options when it comes to filling their lineups. Six NBA players have FanDuel salary cap numbers of $9,000 or higher, with New Orleans Pelicans forward Anthony Davis($11,600) being the most expensive option and Houston Rockets guard James Harden ($11,500) next in line. Both players have proven throughout the season that they're going to get their numbers regardless of the opposition, but with Harden going up against the San Antonio Spurs for the second time this week there's the possibility of some using that as a reason to take Davis instead.

But keep in mind that Harden accounted for 54.9 FanDuel points in Houston's 101-99 win over the Spurs Wednesday night, and that's with him turning the ball over eight times. Harden finished the game with 24 points, 12 rebounds and 15 assists, his first triple-double of the season and the fifth time in nine games in which he's dished out at least 15 assists in a game. Here are the FanDuel roster picks for Saturday's games, working within the rules of a nine-player roster with a $60,000 salary cap. (Getty) 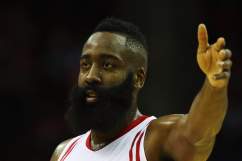