Wednesday's NBA schedule consists of a season-high (thus far) ten games, giving FanDuel players a host of options from which to choose as they look to fill out their nine-man rosters. Among those on the board are consistent triple-double threats in Oklahoma City Thunder guard Russell Westbrook ($12,000), Houston Rockets guard James Harden ($11,200) and New Orleans Pelicans forward/center Anthony Davis ($10,700), all of whom benefit from systems that make them the focal point.

With Westbrook and Harden, they're ball-dominant guards (while Harden isn't listed as a point guard on FanDuel, he essentially is one within Mike D'Antoni's system) who will see plenty of the ball to create either for themselves or their teammates. As for Davis, he's the top option on a team that has yet to win a game this season. Davis, while he won't get the assist numbers that Westbrook and Harden will, is averaging three steals and three blocks per game thus far.

Each player, and their price tag, offers up the following question: do you build your roster around one expensive but highly productive option, or do you look to spread your money around more evenly? Here are today's picks to consider for your FanDuel lineup. (Getty) 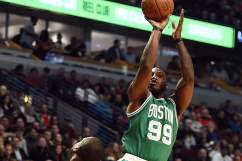