Tuesday's NBA schedule consists of eight games, providing FanDuel players with ample options to fill their rosters with. There's just one player with a salary cap number above $10,000 who will play Tuesday night, Sacramento center DeMarcus Cousins ($11,200), and he's up against a young Denver front line that played in Oakland against Golden State Monday night. For his career Cousins, who's currently averaging 29.0 points, 10.2 rebounds and 3.7 assists per game, is averaging 20.7 points, 9.5 rebounds and 2.4 assists per contest against the Nuggets.

Denver's front court is led by Nikola Jokic and Jusuf Nurkic, with the decision to move Nurkic out of the starting lineup helping with the team's offensive spacing. But the Nuggets are still having issues defending opposing centers, giving up 45.2 FanDuel points per game to opposing center units this season and an average of 53.4 points per contest over the last five. Those stats make it likely that many FanDuel players will look to build their roster around Cousins. But with there also being a host of players with good value in the $7,000-$9,000 range, saving some money by not taking Cousins could pay off as well.

Here are our selections for Tuesday's games, working with a $60,000 salary cap to fill out a nine-man roster. (Getty) 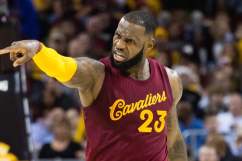