LeBron has scored fewer than 40 FanDuel points in three of the last four games, but given the stage and his importance to the Cavaliers it's tough to pass up the opportunity to add him to the roster. On Christmas Day he accounted for 53.6 FanDuel points, tallying 31 points, 13 rebounds and four assists. Look for James to be much closer to his FanDuel season average (47.5 ppg) than he has been in recent games. (Getty) 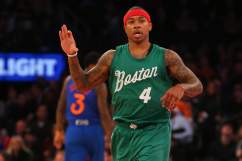 Read More
Basketball, NBA
Cleveland retains the top spot, while Utah makes its return to the rankings after falling out a short time back.