While Sunday's NBA schedule consists of nine games, only five are eligible for FanDuel main league games beginning with the 8:00 p.m. Eastern contests. And from a fantasy standpoint the game that's likely to garner the most attention is Sacramento hosting Golden State. It goes without saying that the Warriors are loaded with quality DFS options, starting with Kevin Durant ($10,200), with Stephen Curry ($9,000), Draymond Green ($8,000) and Klay Thompson ($6,700) also being popular choices. But the Kings' fantasy value can be found primarily in one player: center DeMarcus Cousins ($10,800). Cousins has the highest value of any player in action Sunday, with Durant and Cleveland's LeBron James ($10,100) being next in line.

Averaging 28.5 points, 9.9 rebounds and 3.0 assists per game, Cousins has been good for an average of 48.9 FanDuel points per night. Sunday marks the first time that the Kings and Warriors have played this season, and in the two games Cousins played against Golden State last season he was held in check. Cousins averaged 20.0 points, 7.0 rebounds and 1.5 assists per game against the Warriors, and he shot just 41.7 percent from the field and 28.6 percent from three. The matchup is different this time around with Zaza Pachulia in the middle instead of Andrew Bogut, but given how Golden State has defended for most of this season Cousins will certainly be tested.

Here are our picks for Sunday's FanDuel main league games, using a salary cap of $60,000 to fill out a nine-player roster. Some stats used are from Basketball Reference. (Getty) 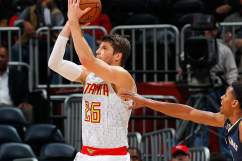