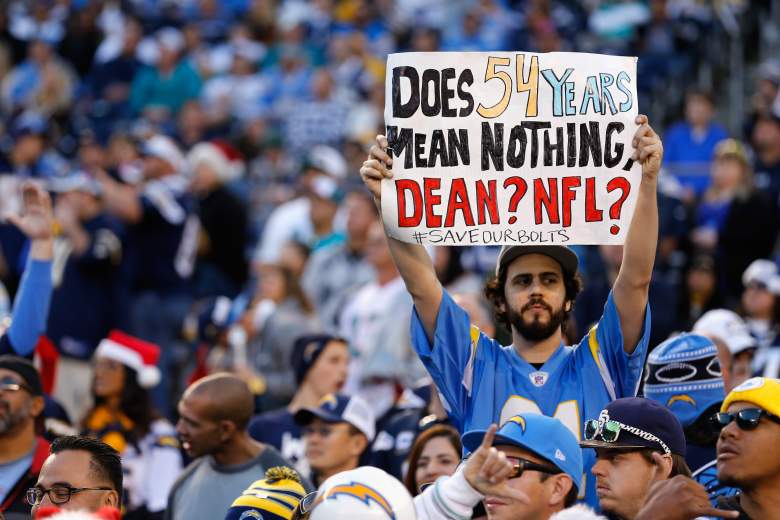 A fan holds a sign supporting the San Diego Chargers during a game stands in the crowd. The franchise is expected to officially announce its move to Los Angeles on January 12. (Getty)

The Chargers are set to move to Los Angeles.

ESPN’s Adam Schefter wrote broke the news January 11 that the franchise will move to Los Angeles, effective for the 2017-18 season.

The Chargers confirmed the move January 12 in an official announcement.

Speculation had run wild throughout the organization in its last two years about a potential move.

Here’s what you need to know about the move:

1. The Announced The Relocation January 12

Schefter reported that the Chargers notified NFL Commissioner Roger Goodell and other league owners of their intentions to move 120-miles north to Hollywood beginning in the 2017-18 season.

The relocation effort has been a long, tedious process which seemed inevitable at times, especially after a proposal to raise the hotel tax in San Diego in order to assist in funding a new stadium and convention center was voted down in November.

A study performed by the team had found that the Chargers have a $289-million impact on the city’s economy, but the study was “likely underestimated due to lack of data on expenditures by visiting fans of the opposing teams and on expenditures by Chargers’ players in the local community.” 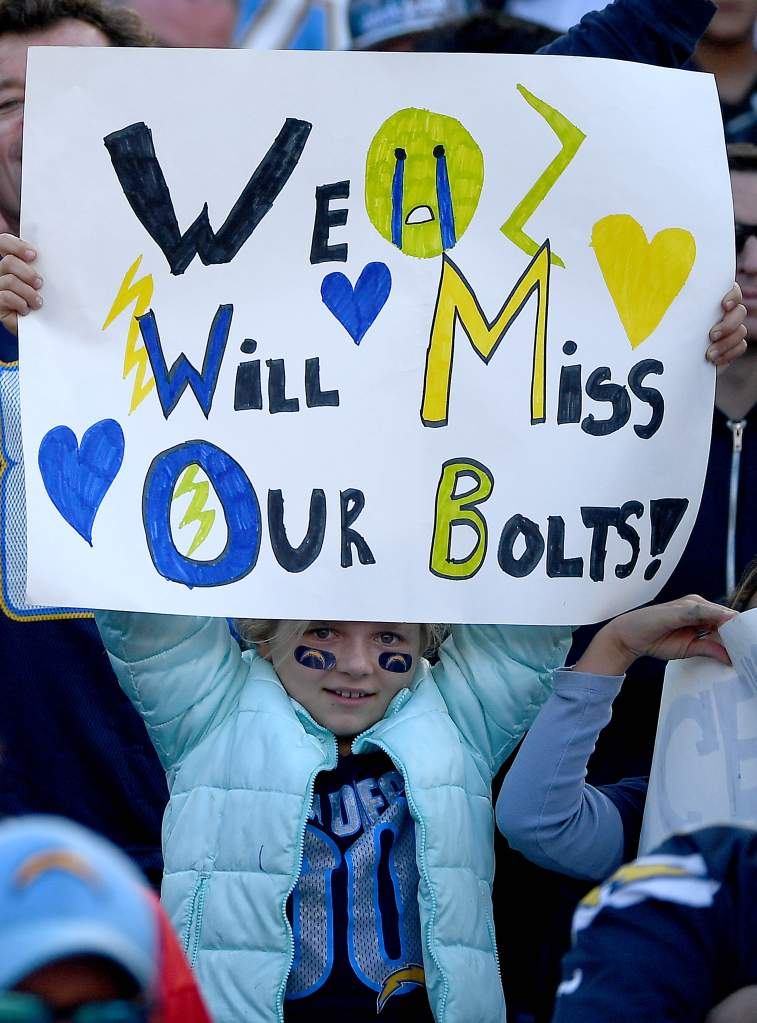 A new stadium for the Chargers in San Diego would have added 6,400 jobs and a nearly $1 billion effect on the local economy. But the price tag of the final proposal proved to be too steep at an estimated $1.8 billion.

Following the unfavorable vote, Spanos told fans that he would wait until the end of the season to decide on plans to relocate.

I’m going to put aside any discussion of our possible next steps until after the season, to allow everyone to focus on football and to give my family and me time to think carefully about what is best for the future of our franchise. Over the coming weeks you may hear news about steps that we must take to preserve all of our options. But please know that I don’t intend to make any decisions until after the regular season ends.

Schefter’s source said that unless Panos gets cold feet and changes his mind at the last minute, all bets are on the franchise moving to L.A.

The move makes the Chargers the second team to move to Los Angeles in less than one year. The Rams announced their intentions to move to the city almost one year ago to the date — January 13, 2016.

2. The Chargers Were Originally Located in Los Angeles 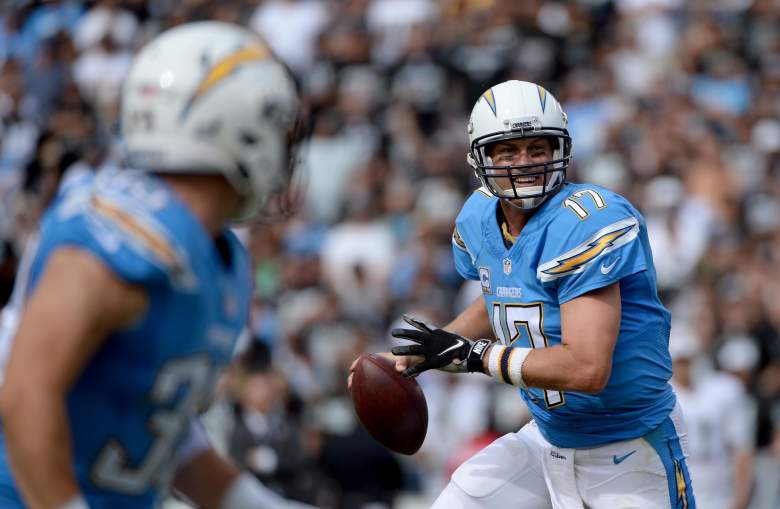 It all started in 1959 when AFL founder Lamar Hunt gave Barron Hilton permission to start a franchise in the league. It was one of the AFL’s first eight teams.

However, the Chargers and Hilton found out how difficult it was to compete in a large market with an established team — the Los Angeles Rams — and didn’t wait long to relocate, moving south to San Diego in 1961.

The move was initially denied in December 1960, but was approved one month later in January 1961.

The newly-relocated team played its games at Balboa Stadium, which was expanded shortly after moving in.

3. The Franchise Has Never Won a Super Bowl

Almost year to the day that the Rams moved to Los Angeles, the Chargers are planning to do the same, @ESPN reports. https://t.co/Gl8dY5vJks pic.twitter.com/m4ax2DtcT0

The Chargers made it to the playoffs 13 times and the AFC Championship four, but have made the Super Bowl just once, Super Bowl XXIX in the 1994-95 season.

After going 8-8 the season before, the Chargers had a 11-5 record during the regular season. San Diego won the AFC West Championship and beat the Pittsburgh Steelers.

San Diego was led by running back Natrone Means and quarterback Stan Humphries. But there was no denying that linebacker Junior Seau, who led the Bolts’ defense.

In the Super Bowl game, San Francisco quarterback Steve Young played like he had something to prove in the game and torches San Diego’s defense.

Young set a new Super Bowl record for touchdown passes with 6. He was 24-of-36 in the game for 325 yards in the game.

Humphries wasn’t so on during the game, completing 24 of his 49 passes for 275 yards, 1 touchdown and 2 interceptions. Means ran the ball 13 times for 33 years and a touchdown in the loss.

San Diego fans have felt much disappointment in the franchise’s 57 seasons. Overall, the Chargers are 426-431-11 with an 11-17 playoff record.

With so much uncertainty about where the team will play next season and after four below-average years, the organization fired head coach Mike McCoy.

When McCoy was hired in 2013, following Norv Turner‘s tenure, he became the 15th coach all-time for the Chargers.

LaDainian Tomlinson is arguably one of the top players in Chargers history.

On January 3, the NFL announced that the longtime running back was a finalist to get inducted into the Pro Football Hall of Fame. He figures to be a lock to be inducted with voting taking place one day before Super Bowl 51.

Tomlinson played seven years of his nine-year career in San Diego. In his final two seasons, he played for the New York Jets. For his career, he ran for 13,684 yards with 145 rushing touchdowns. He was a dual-threat out of the backfield, catching 624 passes in his career for 4,772 yards and 17 touchdowns. He was named the league’s Most Valuable Player in 2006.

In NFL Media historian Elliot Harrison’s ranks him the No. 3 overall player in franchise history. Harrison ranked Hall of Famer’s Junior Seau (linebacker) and quarterback Dan Fouts No. 1 and 2, respectively, in his list. 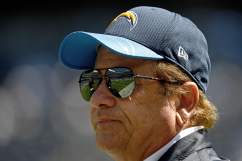 Where Will the Chargers Play Next Season?