The NFL regular season may be over, but daily fantasy football continues to roll along with four wild-card playoff games this weekend. Though picking out a lineup you like from a four-game slate seems pretty difficult, there are actually plenty of different options this weekend. Of the four contests on Saturday and Sunday, three have good scoring potential. Dolphins at Steelers has the highest over/under (47), while both of the NFC matchups (Lions at Seahawks, Giants at Packers) feature passing games that can all score points in a hurry. Only the Raiders vs. Texans contest, which features a scintillating QB matchup of Connor Cook vs. Brock Osweiler, lacks shootout potential, but even there, the running backs could potentially provide solid value. With that in mind, you can click through the gallery for my favorite FanDuel sleepers and bargain picks, or you can read here for more DFS analysis and picks throughout the week. (Getty) 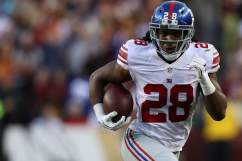