Aflak aired its Super Bowl commercial during the first ad break this evening. The TV spot, called “Surgery”, debuted at 6:20pm, just after Luke Bryan’s performance. Aflac Chief Marketing Officer Gail Galuppo recently told Biz Journals, “After more than 16 years scoring touchdowns as Aflac’s iconic advertising quarterback, we felt the time was right to elevate the Aflac Duck on the world’s stage alongside the other stars as they battle for gridiron immortality.”

According to Prosper Insights and Analytics, 17.7% of adults say that advertisements are the most important part of the Super Bowl, so it’s not a surprise that the cost of a Super Bowl commercial has increased dramatically over the past few years. These days, it costs as much a s $5 million to produce a 30 second ad.

This evening’s game will feature both humorous ads, as well as ones with a more serious tone, and as usual, a lot of celebrities will be part of the fun, like Melissa McCarthy, Justin Bieber, Justin Timerblake, Adam Driver, John Malkovich, Lady Gaga, and more. 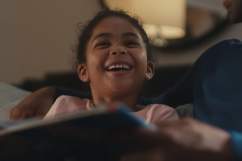