Boston native and celebrity New England Patriots fan Mark Wahlberg was seen leaving NRG Stadium in Houston early during Super Bowl LI, missing his friend Tom Brady engineer the greatest comeback in Super Bowl history. It turns out that Wahlberg had a family emergency and did not mean to make it look like he was giving up on his friend.

“I had to leave the game early because my youngest son wasn’t feeling well. Trust me, I would have loved to be at the stadium — but family first. Doesn’t mean I don’t love my Patriots too,” Wahlberg wrote on his Instagram page. He also posted a picture of his family on the field before the game.

I had to leave the game early because my youngest son wasn't feeling well. Trust me, I would have loved to be at the stadium — but family first. Doesn't mean I don't love my Patriots too! ❤

Since he left early, Wahlberg didn’t get to see his Ted 2 co-star lead the Patriots out of a 28-3 hole to come all the way back to tie the Atlanta Falcons. The game went into overtime for the first time in Super Bowl history, and the Patriots sealed the victory with a touchdown in the opening drive of OT.

Wahlberg and Brady are such good friends that Wahlberg revealed to Ellen DeGeneres that he texted Brady during the Deflategate scandal.

“I sent him a message — saying from a guy who’s been there, [not to] worry about it,” Wahlberg told DeGeneres. “‘Keep your head up. It will all blow over.'”

“He just sent me a very funny response,” Wahlberg said in June 2015. “So I knew he was handling it well. They’re comparing him to Alex Rodriguez, I mean, what are you talking about? I’ll always be there to support him. He’s a good friend and the greatest thing to happen to the Patriots.” 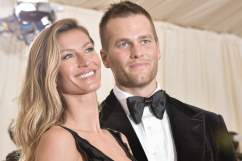