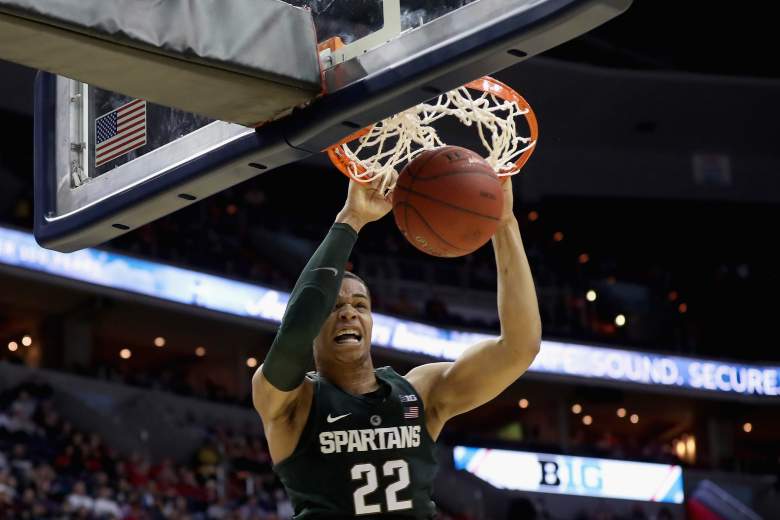 Miles Bridges of the Michigan State Spartans dunks in a game against the Minnesota Golden Gophers on March 10. (Getty)

It’s been an uncharacteristic season for the Michigan State Spartans this year. But alas, they’ve found their way to the NCAA Tournament once more, and there’s no telling where that will result with coach Tom Izzo at the helm.

Michigan State enters the NCAA Tournament for the 20th-straight season and as a No. 9 seed. But their 19-14 record is the worst since the 1995-1996 season. The Spartans limped into the tournament losing three out of their last four games and are looking to avenge a upset loss in the 2016 tournament to Middle Tennessee. But with Izzo coaching, you can never seem to count the Spartans out in the tournament.

The Spartans will play No. 8-seeded Miami in the Round of 64 on Friday, March 17.

The Hurricanes advanced to the tournament out of the ACC, arguably one of the most difficult conferences in the country. They finished 7th in the conference but struggled late in the season, losing four of its last five games.

Here’s a look at the Michigan State-Miami opening matchup and the details of the game:

Michigan State at a Glance

Miami at a Glance

Read More
College Basketball, March Madness 2017
The Michigan State Spartans are seeded No. 9 in the 2017 NCAA Tournament and will play No. 8-seeded Miami. See a full preview of the Round of 64 game.