Randy Moss will be playing professional soccer, most likely.

What looks like it may be an early April Fools joke may actually be happening.

The 40-year-old NFL legend signed a “contract” with the Charlotte Independence of the United Soccer League just one day ahead of their season opener.

Watch Moss put on a No. 84 Independence jersey and join the team in a meeting in the video above.

It’s unknown how long the “contract” is for, or how legitimate it is, but with it coming just one day before April Fools Day, things look awfully suspicious.

Regardless, the team confirmed that they had signed the former professional wide receiver to a contract “pending USL and U.S. Soccer approval.”

Moss said in a press release issued by the club that he’s excited to earn a try on the pitch, He’s been working out at fitness boot camps and Spartan races around the Charlotte area to stay in shape for the opportunity.

Renewing my career is something that I’ve thought about for a long time now. I’m excited to get started with the Charlotte Independence and show the world that I can be a two-sport athlete.

On March 30, Wade Leaphart, a marketer for the Independence hinted at the potential signing in a tweet.

Independence coach Mike Jeffries said that he’s excited to have Moss, a proven winner, on the club.

Our team stands to gain a lot by bringing in Randy. Obviously, he’s a proven winner and his athleticism is an attribute that translates to any sport he plays.

If Moss does indeed suit up and find playing time on the pitch, it’s not like he’s totally out of his element. He’s spent time playing the sport in the past, and although it wasn’t game action, he didn’t look too bad in a highlight tape.

It became “official” March 31, with Moss stating that he will play goalie for the club.

Moss isn’t the only former NFL wide receiver to try and make the switch to play soccer.

In 2011, Chad Ochocinco made headlines when worked out in an effort to sign with Sporting Kansas City of Major League Soccer.

Anyway you look at it, it’s some good publicity for the soccer club right before the season kicks off.

The Independence placed fifth last season in the USL’s Eastern Conference. Their season opens on April 1 against the Charleston Battery on the campus of UNC-Charlotte. 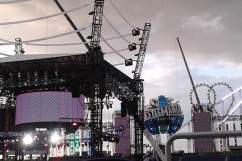