Fight fans will get one last look at undefeated world champions Keith Thurman and Danny Garcia ahead of Saturday’s hotly anticipated welterweight unification when the fighters step on the scales at today’s weigh-in. The official weigh-in begins at 1 p.m. ET/10 a.m. PT at LIU Brooklyn and you can watch it live in the stream above.

“This fight has been brewing for a long time,” Thurman (27-0, 22 KOs) said at Thursday’s final presser. “Both of us wanted this fight. There’s a reason why this fight is happening. We’re young, we’re hungry and we’re not trying to wait around. It’s time for this to go down.”

28-year-old Thurman was last in action outpointing Shawn Porter in June of last year. Prior to the Porter bout, the Clearwater, Florida native had stopped veteran Luis Collazo via cuts in the seventh round of their July, 2014 encounter, and had outpointed Robert Guerrero, and Leoneard Bundu, and retired Julio Diaz.

“It’s Danny’s reputation against my reputation,” said Thurman. “We’re both prideful fighters. You’re putting two of the best together. He wants to prove that he can be a unified champion in two divisions and I’ve been waiting for this opportunity to get fights like this. I want to show how and why I’m better than my competition. Saturday night is my platform to show the world how great of a champion I am.”

Fighting out of Philadelphia, Pennsylvania, Danny Garcia (27-0, 22 KOs), 28 years old, made his last appearance in the ring with victory over Samuel Vargas via seventh-round TKO. The fight followed wins over Robert Guerrero, Paulie Malignaggi, and Lamont Peterson.

“Legacy is very important to me,” said Garcia. “I have more milestones than Thurman. This is his biggest fight. I’ve been in big fights before. Every championship fight is a part of history.”

Also at the weigh-in, and rounding out Saturday’s undercard: undefeated rising star Erickson Lubin takes on the hard-hitting Jorge Cota in a super welterweight title eliminator. 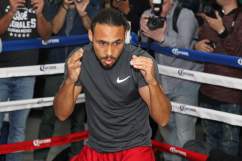 Keith Thurman vs. Danny Garcia: Predictions from the Protagonists