With rumors swirling around Mike Glennon and a contract that could start at $14-$15 million per season, many NFL fans are wondering who Glennon is and why teams would be willing to pay a backup quarterback so much money. In some ways, the more you explore Glennon the more sense it makes. Maybe it is true what people say, being a backup NFL quarterback is the best job in the world.

His sophomore season is when things started going downhill for Glennon. He played in just six games and was benched midway through the season in favor of veteran Josh McCown. Glennon threw for 1,417 yards, 10 touchdowns and 6 interceptions in his six appearances. It was the beginning of the end for Glennon in Tampa Bay.

The Bucs would go on to draft Florida State standout quarterback Jameis Winston in 2015 with the top pick in the draft. Glennon served as Winston’s backup the past two seasons.

It was not all bad news during his time in Tampa, Glennon got married to his then girlfriend, Jessica Wetherill, who he met at NC State. Jessica graduated from NC State with a finance degree, and the couple recently had a son named Brady. The family appears to be on the move as he tries to get more time on the football field.

Some NFL teams are looking at Glennon as a person in the wrong place at the wrong time. From Glennon’s perspective, it could turn out to be the perfect turn of events. As Brock Osweiler proved last off-season, sometimes less is more. Osweiler benefited from a small sample size in Denver with limited scrutiny to command a big payday. The Texans gave him a $72 million contract with $37 million guaranteed.

It would be shocking for Glennon to receive that sort of a contract, especially given Osweiler’s contract is serving as a prime example in the league for what not to do in free agency.

The truth is we do not know how good of a quarterback Glennon can be. The Bucs had two great quarterbacks to choose from in 2015 which in some ways prevented Glennon from getting the full opportunity that many young quarterbacks receive. At 6’6″, he has the size that many NFL teams covet in a quarterback. He has already outperformed his third-round draft status.

An NFL team will likely gamble on Glennon’s potential with a short-term contract even if it does cost them $14 million per season. There is a shortage of starting quarterbacks in the NFL, and Glennon showed enough in his brief career to make teams think he could make it in the right system. According to The Tampa Bay Times, the Bucs have already offered Glennon over $7 million per season to make him the highest paid backup in the league.

Chances are Glennon will move on from Tampa to try to land a starting gig again. NFL Network’s Ian Rapoport reports the Chicago Bears are the leaders in the clubhouse and are willing to pay up to land Glennon.

It could be a good signing for Chicago given no quarterback in this draft class appears to be ready to come in and start right away. The Texans do serve as a warning to tread lightly with quarterbacks with a limited body of work, but Osweiler was just one scenario of what can happen. The New York Daily News reported the Jets are not willing to pay Glennon’s price tag despite their need at the position. 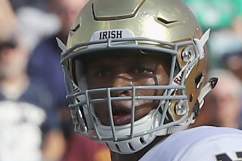