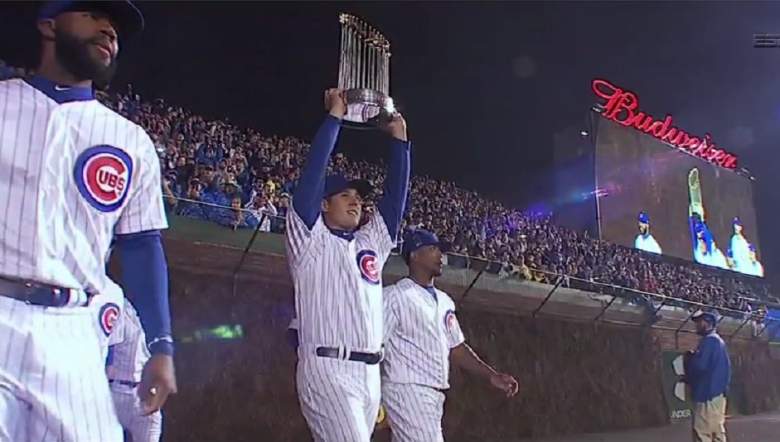 The Chicago Cubs and their fans had to wait just a little bit longer to celebrate the team’s World Series championship at Wrigley Field.

Prior Cubs’ first game at home this season, the team held the World Series trophy up high, amidst fireworks and raised the championship banners. But that came after a lengthy rain delay due to poor conditions in Chicago.

The team was introduced to the rowdy Wrigley Field crowd and paraded around the field with the trophy. Anthony Rizzo was the one to come out and hold the trophy high above his head

Watch a video of the ceremony below:

The Cubs won the 2016 World Series in an unforgettable seven-game series against the Cleveland Indians, four games to three.

It was Chicago’s first world championship since 1908 and it required the team to come back from a three-games-to-one deficit. The team was playing in its 11th-ever World Series — first since 1945.

In Game 7 of the series, Dexter Fowler led off with a home run. He was the first player ever to hit a lead-off homer in a Game 7 of a World Series.

The Indians battled back and tied the game in the third inning, but Chicago countered with two runs in the next inning and Javier Baez led off the fifth with a home run to move the lead to 4-1. Then Rizzo stood up to the plate and hit an RBI single to extend the lead.

But the Indians countered and made the game even more dramatic.

Cleveland cut the lead to 5-3, but Chicago’s David Ross hit a homer to move ahead 6-3. But that wasn’t the end of it, not even close.

Cleveland cut the score to 6-4 and Rajai Davis stood to the plate in the eighth inning and hit a game-tying home run.

A 17-minute rain delay halted the game momentarily as it headed into extra innings. Then, in the top of the 10th inning, Ben Zobrist put a cap on the game and the World Series with an RBI double. The Cubs pushed the score to 8-6 after a Miguel Montero single and were able to shut down the Indians’ batters in the bottom-half of the inning to win the game and the series. 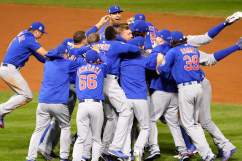 Cubs vs. Dodgers Opening Day 2017: How to Watch Online