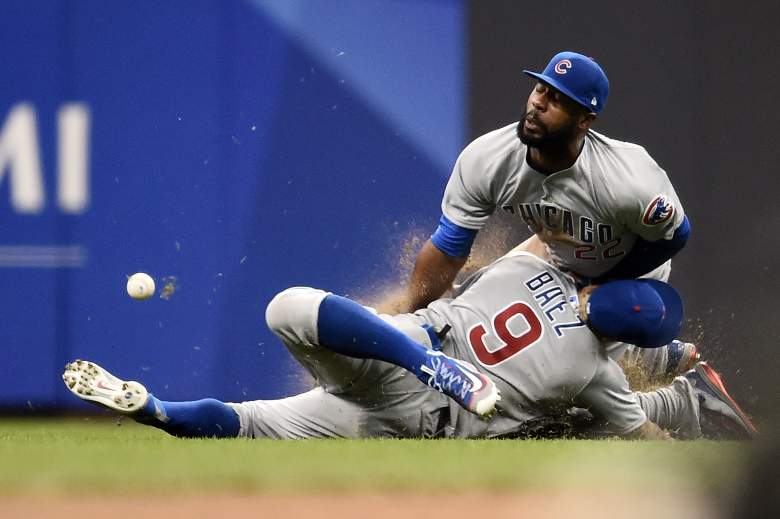 Chicago Cubs infielder Javier Baez collides with Jason Heyward in a game against the Milwaukee Brewers on April 7. (Getty)

Chicago Cubs infielder Javier Baez suffered a left eye contusion after a scary collision with Jayson Heyward in the outfield on Friday.

The Cubs were tied with the Milwaukee Brewers, 1-1, in the sixth inning at that point of the game, and an unaware Baez collided with the larger Heyward at a dead-on sprint.

Baez laid on the ground after the collision before being helped to the locker room by trainers. He didn’t return to the game, though it seems that the bruised eye wasn’t too serious. 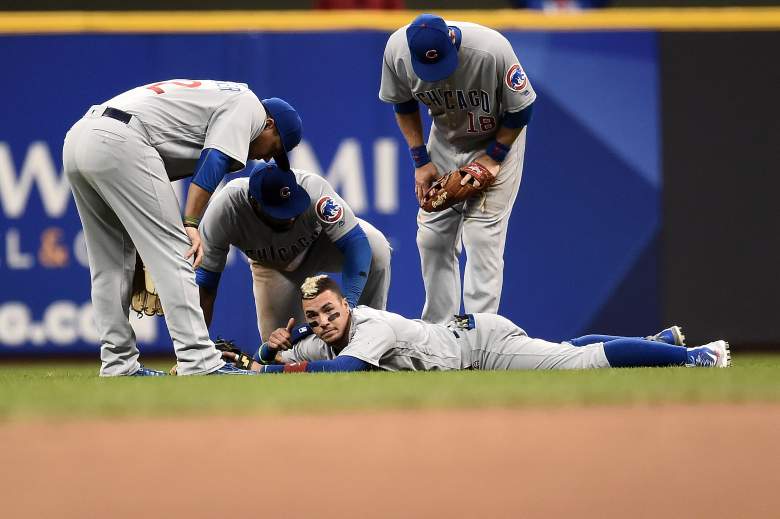 Javier Baez of the Chicago Cubs signals he is OK following a collision with Jason Heyward. (Getty)

In the collision, Baez ran full speed into the outfield with his back turned to the plate and head trying to track the ball.

Unaware to him, Heyward was chasing the ball from the outfield and didn’t notice Baez until the last second. Baez dove into Heyward’s outstretched leg, with his face rocketing off his inner thigh. He fell onto the grass at Miller Park in discomfort, and it looked as if the injury could potentially be a serious one. Eventually, he gave a thumbs up, signifying that he would be OK.

To watch a video of the incident, click below. 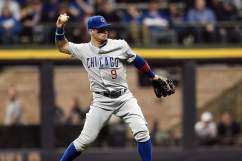 When team trainers aided him, he appeared shaken and the initial prognosis looked as if it may be a concussion. But Chicago confirmed shortly after the incident that said he had suffered the left eye contusion and would not be returning to the game.

The Cubs ended up losing the game to the Brewers in extra innings on a walk-off wild pitch, 2-1.

2. Baez Said He Feels Fine, Could Have Stayed In the Game & Expects to Play Saturday 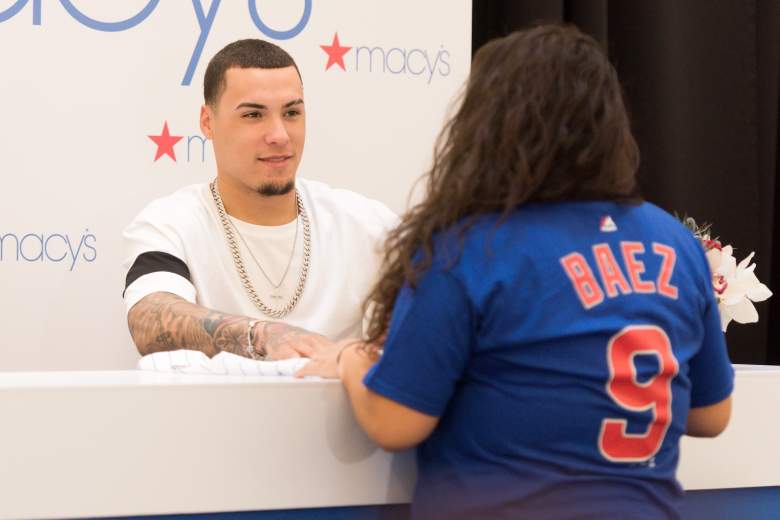 After the game, Baez provided an update on his condition. He said that he feels fine and could have returned to the game, but his eye started to swell up and the training staff and manager Joe Maddon didn’t want to risk anything, so they ended his night.

He described the incident to reporters in the locker room, saying that as soon as he turned to see what was coming at him, he saw Heyward directly in his face and couldn’t see what hit him until he looked up on the scoreboard and saw the replay.

Baez joked that he saw Heyward coming at him “in 3D” before knocking him over. But he took the injury in stride and it appeared as if he would ready to go for the second game of the season against the Brewers on April 8.

He ended the interview by saying that everything is “perfectly fine.” 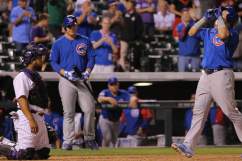 3. Baez Had Been Struggling at the Plate Before That Point After a Great 2016 Season 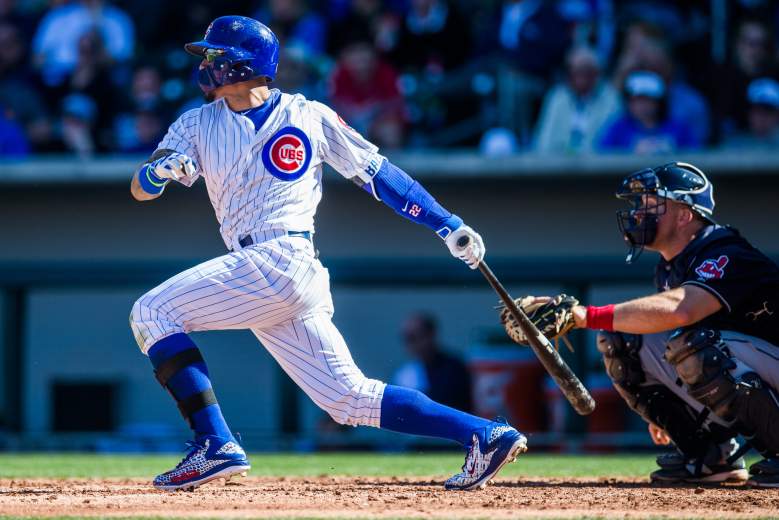 After a strong 2016 season for the World Series Champions, the future looked bright for Baez.

While he remains a key component of the Cubs’ infield, Baez had a slow start at the plate in the first series of the season against the St. Louis Cardinals.

So far through the season, Baez is 1-for-10 for a .100 batting average with an RBI and 4 strikeouts.

Baez had a breakout year last season. He batted .273 with 59 RBIs, 14 home runs and a .737 OPS and was one of the guys leading the charge in the postseason.

He had 69 plate appearances in the playoffs with a .265 average, 2 home runs and 8 RBIs. He was named a co-MVP for his performance in the National League Championship Series against the Los Angeles Dodgers along with pitcher Jon Lester.

In that series, Baez hit .318 to produce 5 RBIs. He had some of the most exciting plays in the NLCS, stealing home and making a slew of defensive plays.

In the World Series against the Cleveland Indians, Baez faltered, however. He was just 5-for-30 in the seven-game series, but had a huge home run in Game 7 — a leadoff homer to give the Cubs a 4-1 lead early in the fifth inning. 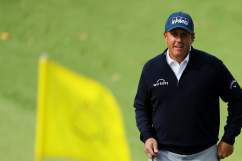 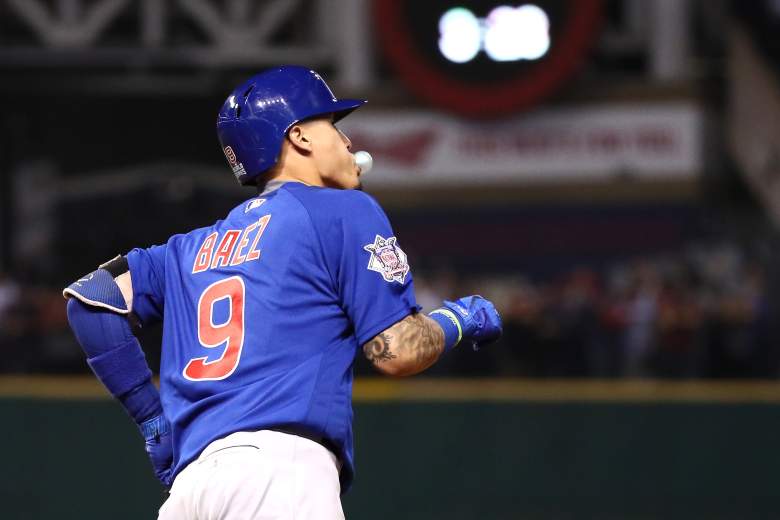 Baez was born and raised in Puerto Rico and moved to Florida with his family in 2005. Early on in his career, not much stuck out that said he would be a future star in the MLB.

At Arlington Country Day School, Baez piled up huge seasons, though. As a sophomore, he averaged .463 at the plate with 9 doubles and 13 homers.

He was an All-American by the time he was a sophomore and put together a batting average of .771 as a senior with 20 doubles and 22 homers. But he never had a solidified position in high school, working throughout the infield and also as an outfielder and a catcher.

Baez’s life changed forever when he was selected No. 9 overall in the 2011 MLB Draft by the Cubs. He played sparsely with the Cubs’ rookie-level team and soon enough found his way to the Peoria Chiefs, Chicago’s Single-A team.

In 2013, Baez was rated by MLB.com as the No. 16 top prospect in all of baseball and he was offered a spring training invitation.

During spring training, Baez hit .298 with 10 RBIs before heading back to an affiliate in Daytona, Florida. That season with the minor-league team, he hit four homers in one game.

Baez returned to spring training in 2014 and an injury to Stalin Castro saw him get additional playing time. He opened the season playing in Triple A, but struggled initially. He improved on his numbers and defense as the season progressed and he was promoted to the Cubs’ main roster in August 2014.

He started 2015 in Triple-A once again, but was called up toward the end of that season and had a big impact on the Cubs advancing to the NLCS to play the Cardinals. He his a 3-run homer in the NL Divisional Round to advance the Cubs.

Then came 2016, when he found his groove and aided the Cubs as a solid option on defense and as the plate as they won their first World Series championship in 108 years. 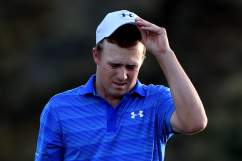 5. He Won a Silver Medal With Puerto Rico in the World Baseball Classic Before the 2017 Season

MESA, AZ – FEBRUARY 26: Javier Baez #9 of the Chicago Cubs bats in the fifth inning during a spring training game against the Cleveland Indians at Sloan Park on February 26, 2017 in Mesa, Arizona. (Photo by Rob Tringali/Getty Images)

Before starting the 2017 season, Baez played for his native country, Puerto Rico, in the 2017 World Baseball Classic. The nation won a silver medal in the event, losing to the United States in the championship game.

But Baez was one of the best players on the roster during the tournament. He averaged .296 at the plate and hit 1 homer with 5 RBIs. He led the entire tournament in stolen bases and was named to the All-World Baseball Classic team.