Golfer Rickie Fowler is dating pole vaulter Allison Stokke. The two were seen together at the 2017 U.S. Open.

Fowler and Stokke posted photos of each other hanging out on Instagram on April 23, launching speculation that the two are dating. A few days later, Jason Day practically confirmed that Fowler and Stokke are an item.

“He was busy with his beautiful girlfriend,” Day said during a press conference on April 26, notes Golfweek.

Stokke’s name should sound familiar to anyone who was using the Internet in 2007 and 2008. She became famous after a photo of her when she was only 17 went viral, sparking a discussion of the sexulization of women in sports and how young women are viewed on the web. A decade later, the 28-year-old Stokke is a professional athlete and sports model.

Here’s what you need to know about Stokke.

As a fitness model, Stokke uses Instagram regularly to show off her body and exercise routines. Boyfriend Rickie Fowler often appears on her feed as well, such as the recent pic of the two with the first-place trophy from his $1 million win at the Hero World Challenge in December 2017.

More recently, she shared a snap of them at the beach on Valentine’s Day. Other R&R highlights include dressing up for Halloween, a wine tasting in Napa Valley, celebrating Independence Day together, and posing with a pair of baby cheetahs at the Columbus zoo.

Fowler’s first appearance on Stokke’s Instagram came on April 23, 2017. Both posted photos of the two hanging out together at the Circuit of the Americas race course in Austin, Texas, to attend the Red Bull Grand Prix.

But an hour later, Stokke added, “We tied?” 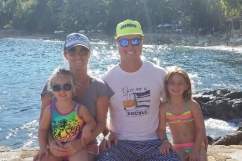 2. Stokke Became an Internet Sensation After a Photo of Her in High School Went Viral

Stokke’s brush with Internet fame proves that social media isn’t needed to make something go viral on the web. The story started in 2007, before the invention of Facebook or Twitter, when the Newport Beach, California native was at a track meet in New York and a journalist took a picture of her fixing her hair. A year later, Facebook was in its infancy and a University of California, Berkeley, fan posted that photo and it showed up on WithLeather.com, a New York sports blog site now owned by Uproxx. The photo had been taken when she was only 17 years old.

The original story, without the photo, still exists on Uproxx, but the photo has gone on to find a place in Internet history.

Stokke became world-famous, even though she didn’t want to be. She just wanted to be known for her athletic skills. But she started getting interview requests from around the world. She even asked her high school track coach if he knew any media consultants she could hire, The Washington Post reported.

“Even if none of it is illegal, it just all feels really demeaning,” Stokke, who won the 2004 California state pole vaulting title, told the Post in 2007. “I worked so hard for pole vaulting and all this other stuff, and it’s almost like that doesn’t matter. Nobody sees that. Nobody really sees me.”

3. She Says the Famous Picture Is Now Her ‘Alter-Ego’ & Doesn’t See Herself as a Victim

In a 2016 interview with ESPNW, Stokke said that she doesn’t want to be a sex symbol, but she can’t do much about the photo. It exists and will always be on the Internet.

Stokke doesn’t see herself as a victim, ESPNW reported. Instead, she pushed herself even further after her 15 minutes of fame were over.

“If she was going to be in the limelight, it was going to be because she was an athlete, and she knew that was about her looks,” Cindy Stokke, her mother, told ESPNW. “She wanted to be known for her ability to pole vault. That’s what she wanted.”

Stokke told the site that she’s working to reclaim it and even benefit from the photo being out there. “If I try to ignore it, it will take on a life of its own. Which is what I did in college: ignore it. And I lost control of my own story,” Stokke said. 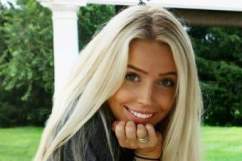 Stokke continues to train and compete, now working out in Arizona. But she still hasn’t made an Olympic team. She was among 12 pole vaulters to fail to jump over the first height at the 2012 U.S. Olympic Trials. In 2016, she didn’t qualify for the Olympic Trials.

When she’s not training, Stokke loves power yoga, she told Athleta in 2015. She explained her workout regimen to the site:

I run almost every day, on the track or on grass. Most of the running we do is shorter, i.e. multiple sets and reps of 150m or less with varying rest periods. Along with running, I do plyometrics and drills specific to pole vaulting. I also try to add several days a week of yoga and/or stand up paddling, depending on the time of year.

After graduating from the University of California, Berkeley, Stokke started cashing in on her fame, earning deals from Nike, Athleta and Uniqlo to appear in their ads in 2015. Stokke did a photoshoot for Nike’s spring/summer 2015 women’s wear line.

In 2015, Stokke also appeared in a video to promote the GoPro camera. She wore a camera on the top of her head to give viewers a look at her view when she’s pole vaulting. The video has been viewed more than 7 million times on YouTube.

According to her LinkedIn page, Stokke earned a degree in Sociology at UC Berkeley in 2011 and a Masters in Education in 2013.