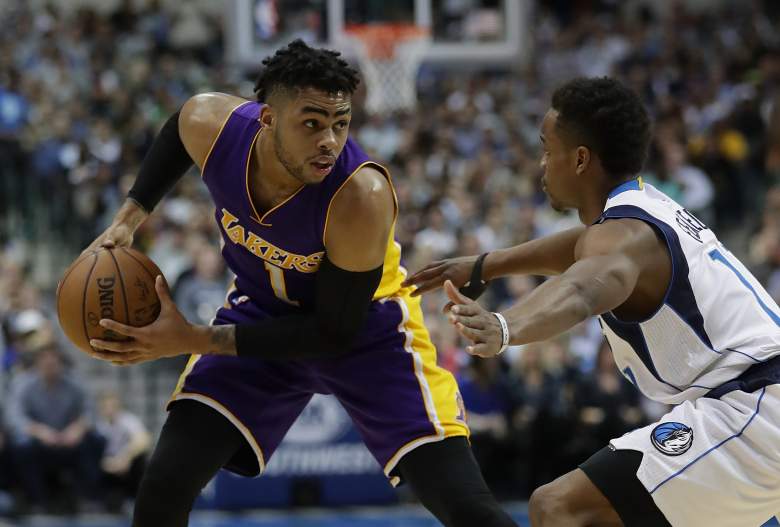 D’Angelo Russell is leaving Los Angeles for Brooklyn after being traded on Tuesday. (Getty)

The Los Angeles Lakers are moving on from D’Angelo Russell, trading the former No. 2 overall pick to the Brooklyn Nets for center Brook Lopez and the 27th pick in the upcoming NBA Draft, according to The Vertical’s Adrian Wojnarowski. Magic Johnson and the Lakers are also shifting center Timofey Mozgov to the Nets in the deal.

With this trade, the Lakers now have three selections in the first round of Thursday’s draft (No. 2, No. 27 and No. 28). 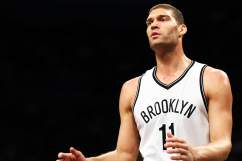 Russell, who was selected with the second pick in the 2015 NBA Draft behind only Karl-Anthony Towns, has been a bit of a disappointment in his early tenure with the Lakers and will now move onto the rebuilding Brooklyn Nets and presumably run the show there. In his rookie campaign, Russell averaged 13.2 ppg and 3.3 apg — starting just 48 contests. His sophomore season — under new head coach Luke Walton — saw Russell start 60 of the 62 games he played in, averaging 15.6 ppg and 4.8 apg.

Meanwhile, Lopez, has spent all nine of his NBA seasons with the Nets — becoming the franchise’s leading scorer just last year. The 10th overall pick in the 2008 NBA Draft, Lopez has one year left on his deal at $22.6 million and will be come an unrestricted free agent after the 2017-2018 season.

Mozgov signed with the Lakers as a free agent last summer, penning a 4-year $64 million deal. Brooklyn will be on the hook for the remaining three years of his deal at an average salary of $16 million per.

For the Lakers, this is longer-term play to clear space for Paul George and LeBron James pursuit. Lonzo Ball on way at No.2 https://t.co/KxfdEuAUO0

As Wojnarowski points out, trading Mozgov frees up ample cap space for the 2018 offseason where the Lakers will be all-in on Indiana Pacers forward Paul George. As was reported earlier today by ESPN, Los Angeles and Indiana did begin trade talks surrounding the superstar — who has informed the Pacers of his desire to leave the franchise when his contract expires at the end of the upcoming season.

Following the Russell/Lopez trade, Stein reported that the Lakers are now trying to package their two, late-first round picks, along with either Julius Randle or Jordan Clarkson, to go and get George from the Pacers right now.

But as TNT’s David Aldridge notes, now that the Lakers have freed themselves of Mozgov’s burdensome deal — they no longer need to give up assets for George, instead they can wait until next summer to sign him as a free agent.

Getting rid of Mozgov contract is huge for Lakers—who, again, aren’t obligated to make a deal for Paul George now. Now have major ’18 room.

Surely, the Pacers will be motivated to move George rather than lose him for nothing, so it’s reasonable to expect the rental market for the 27-year-old to heat up.

Oh and yes, it now appears Lavar Ball will get his wish — his son Lonzo should be a member of the Los Angeles Lakers, as Wojnarowski noted, when Magic Johnson and company select No. 2 in Thursday’s NBA Draft. With Russell out of the picture, Ball should slot in as the starting point guard for Walton and company.