The week after the U.S. Open is usually a pretty low-key group of golfers competing, but the same can’t be said about this year’s Travelers Championship. It seems that multiple big names have opted to take part in the event, including the likes of Jordan Spieth, Rory McIlroy, Jason Day, Justin Thomas, Paul Casey, Brian Harman and plenty of others.

While it’s great to see the big names participating in the event, it also makes creating a fantasy lineup all that much harder. Fortunately, there are a few solid sleepers to choose from this week as well, meaning that you should be able to get one or two studs into your DraftKings lineups.

This event is played at TPC River Highlands and is one of the easiest courses that these golfers are likely going to play. There are eight Par 4s that are between 400-450 yards, which means that players are going to be able to really play to their advantages, instead of having to hit their tee shots a massive distance. In turn, there are quite a few players who have the type of game that could benefit from this course. A key here will be finding players who have a good drive percentage.

Here’s a look at my ideal DraftKings lineup:

It was a great debate at the top to whether or not I wanted to jump all over McIlroy and his monstrous $11,600 price tag. In the end, Justin Thomas’ potential and the cheaper price tag was too much to not jump on. He’s fresh off a record-breaking third round at the U/S. Open, which included a T9 finish. That was also his second straight top-10 finish, giving him five top-10’s on the season. To put it all together, Thomas finished in third at this event last season with a score of 12-under. He should light it up this week and is a great bet to win the event.

As for Paul Casey, he was rolling heading into the weekend at U.S. Open and looked like a serious contender. He did fall off in the end, which was disappointing, but he’ll bounce back nicely this week at a course where he finished second in 2015 and T17 in 2016. He not only has experience at this course, but Casey also hasn’t finished worse than 26th in any of his last five PGA Tour events and has made 11 of 12 cuts this season. Casey will be there with Thomas at the end, and these two make for a great top-tier pairing.

Brendan Steele is only a slight drop-off in price, as we’re going with the “stars and scrubs” approach, with all due respect to the other three guys in the lineup. Not only has Steele not missed a cut this season, but he also finished fifth in this event in 2014. There haven’t been many players as consistent as Steele this year, and his finishes of 13th and sixth at the U.S. Open and The Players Championship go to show that he can dominate tough courses. Now, imagine what he’s capable of doing at a course that goes hand-in-hand with his game.

The selection of Charley Hoffman is one that’s going to feature a very high ownership, as his price is simply too low. He’s missed just two cuts this season and finished eighth at the U.S. Open last weekend. Tack on the fact that he has three top-10 finishes on the season and is someone you can rely on to keep your lineup safe into the weekend, and it’s hard to pass on him here. He’s not the greatest of GPP plays for the week, but his $7,300 price tag just opens things up too much to not use him.

Finally, comes the duo of $6,900 players in Chaz Reavie and Webb Simpson. Do both players come with some risk? Sure, but they also come with upside. Reavie has been playing strong golf as of late, finishing T4 at St. Jude and T16 at the U.S. Open. To make him even more appealing, he’s made the cut at TPC River Highlands in each of his last five appearances. It’s tough to gauge how his ownership will look, but similar to Hoffman, the strong play, and low price tag is too much to pass on.

Simpson hasn’t played great amazing this season, but even still has put together three top-20s and a fifth-place finish. The slow greens are going to help Simpson out on this course, which makes him an even more appealing play. Finally, when looking at his track record at this course, he’s never missed a cut and finished fifth at the event back in 2013, so he certainly has the high-upside that you often can’t find from a sub-$7,000 player. 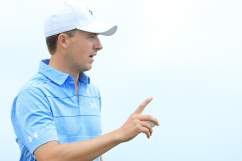