They finally did it.

After weeks of rumors surrounding the future of Paul George with the Indiana Pacers, the team agreed to trade the superstar forward on Friday night to the Oklahoma City Thunder.

Paul George has been traded to OKC, per sources

The Pacers will receive guard Victor Oladipo and young forward Domantas Sabonis in the deal, per USA Today’s Sam Amick.

By trading George, who was entering the final year of his contract, the Pacers are signaling it’s time to rebuild. George made it clear he was not going to re-sign with Indiana next summer, forcing the Pacers to deal the four-time All Star while his value was still high.

George is still set to be a free agent next summer but playing this season with Russell Westbrook in Oklahoma City, who do hold his bird rights, could convince the 27-year-old to stick around. 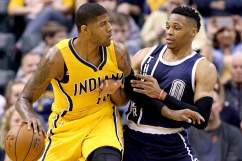 Here’s an early look at the Pacers roster heading into what figures to be a long 2017-2018 season in which the team will look to develop young talent and gather assets.

By trading George, the Pacers are now dangerously thin at small forward with just the inconsistent Stephenson and 2016 2nd round pick Niang.

Acquiring Sabonis and pairing him with Turner gives Indiana an intriguing and young, 1-2 punch at power forward and center. Sabonis — the son of Hall of Famer Arvydas Sabonis — was a lottery selection in 2016, taken 11th overall by the Orlando Magic before being traded on draft night to Oklahoma City. Turner was selected 11th overall in 2015, averaging an impressive 14.5 ppg with 7.3 rpg and 2.1 blocks last season.

Oladipo is also a nice piece and does a lot of positive things on the floor, but does have four years remaining on his deal at $21 million per. Monta Ellis, who played in 73 games for Indiana season, has been waived and the team figures to lose Miles in free agency.

As for the point guard spot, incumbent starter Jeff Teague left in free agency for Minnesota, according to ESPN’s Marc Stein. To replace him, Indiana inked veteran Darren Collison to a two-year, $20 million deal. Collison previously played for the Pacers from 2010 to 2012. Brooks could return but he is 32-years-old and will likely look to play for a contender. Sumner and Young are interesting prospects but the former is coming off an ACL tear, while the latter has averaged just seven minutes per game over the course of his first two seasons in the league.