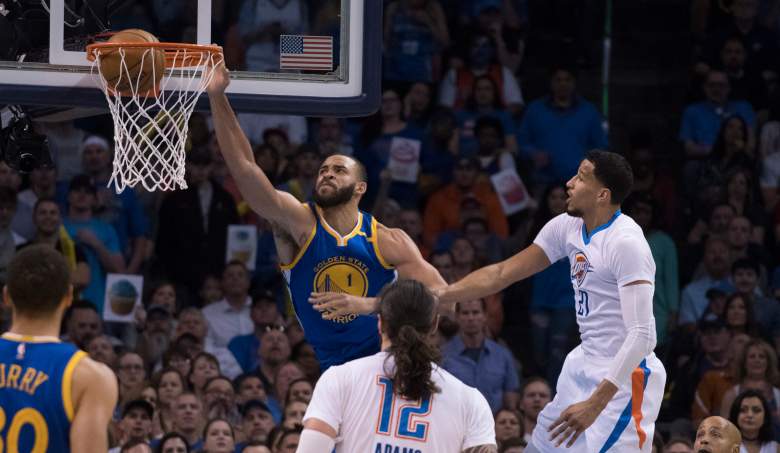 McGee showed up wearing an old school hat with Shaq’s logo on the front. And it likely wasn’t because he’s a fan of the NBA legend. The trolling effort by McGee comes after a longstanding feud that he’s had this season with Shaq.

See the photos of McGee walking into Oracle Arena with the hat on below:

McGee has been a common character on Shaq’s “Shaqtin’ A Fool” segment that runs on TNT. The segment contains a number of “lowlights” from games, and Shaq hasn’t shied away from featuring the Warriors center. Shaq took things to a new level when he showed a parody of Dr. Strange starring McGee.

The parody apparently didn’t sit well with McGee, who sent out a string of tweets directed at Shaq after it aired.

@SHAQ get my ?'s out of your mouth! And EAD! #thatisall

Last thing: think about this…. h3 woke up and I was the 1st thing on his mind when he made that video…THAT AINT WIERD TO YALL?

Maybe he's in love with me…. maybe I should be flattered? IDK GUYS!! pic.twitter.com/Buqyqc2PBb

But Shaq didn’t take the criticism lightly, as he responded harshly by threatening McGee.

That was like pouring gas onto a fire, as McGee fired back at Shaq, and the beef between the two escalated.

Oh we threatening people now? Kick rocks you old bastard… you ain't gone do sh** !!! And that's on my mama… stick to cooning! https://t.co/ZFuGREc1WJ

Forget being on a good team… Ima grown man… you've had these ?'s in yo mouth for 5-6 years now… u thought I was just gone stay silent? https://t.co/3gTpTgVgmU

The feud got so bad that the Warriors reportedly reached out to Turner Sports to tell Shaq to lighten up and expressed concern over the way McGeee had been treated on TNT, ESPN reported. Kevin Durant even spoke out and defended his teammate.

Kevin Durant comes to JaVale McGee's defense vs Shaq: "I didn't know cops could threaten civilians like that" pic.twitter.com/gsx79h04c8

But then suddenly, the feud came to an end. And it may have been because of Shaq’s mom, as he told The Undefeated. Even McGee’s mom, Pamela, was furious over the interaction between the two, telling The Undefeated that it’s not OK to bully.

“This is straight-up black-on-black oppression,” she said in an interview with the website. “We’re becoming a nation where we now have someone in the White House saying it’s now OK to bully and disrespect.”

A few days later, Shaq addressed the issue and claimed that he would “never speak of” McGee again.

With the Warriors taking on the Cleveland Cavaliers in the Finals for the third year in a row, it seems likely that this feud has been turned up another notch.