During Thursday’s NBA draft, the Minnesota Timberwolves and Chicago Bulls struck a deal that sent the NBA world into a tailspin. Bulls All-Star shooting guard Jimmy Butler has been traded to the Timberwolves, per The Vertical’s Adrian Wojnarowski and 670 The Score. Chicago sent Butler to Minnesota for Kris Dunn, Zach LaVine and the No. 7 pick, which wound up being Lauri Markkanen from Arizona. The Timberwolves also received the No. 16 pick, which resulted in Justin Patton from Creighton.

Chicago is finalizing a deal to send Jimmy Butler to Minnesota for Zach LaVine, Kris Dunn and No. 7 pick, league source says.

While the deal will reunite Butler with his old coach in Tom Thibodeau, it seems that the All-Star isn’t the slightest bit happy about how it all went down. As theScore points out, Butler sounded off on being the face of the franchise in Chicago, and not wanting to labeled as that anymore.

All Jimmy Butler wants is to be 'a player for the Timberwolves.' https://t.co/s3SkYA25q3 pic.twitter.com/TVbtBSdkFM

He wasn’t the only frustrated one, though, as his agent Travelle Gaines went off on the Bulls and their general manager Gar Forman, per Sports Illustrated. He went as far as saying that he’s “met drug dealers with better morals than their GM.”

'I met drug dealers with better morals than their GM' — Jimmy Butler's trainer rips the Bulls after the trade with Minnesota pic.twitter.com/YKZfKQCjbb

With the deal done, let’s now take a look at the Bulls roster and how it will look without Butler, with the projected starting lineup having an asterisk next to it.

Something has to give here, because as you see, Wade is listed as a “small forward,” but is actually a shooting guard. Obviously, the Bulls aren’t going to not start Wade, but LaVine will be starting as well, so those two paired up will make for a shooting guard duo. Before the offseason, Wade’s future in Chicago seemed up in the air, but as Vincent Goodwill of CSN Chicago pointed out, he’ll pick up his player option even after the Butler trade.

Dwyane Wade is still taking his player option for $23.8 million next season, according to sources. The Jimmy Butler trade affects nothing

From there, the Bulls have a ton of point guards. Goodwill also pointed out that the Bulls have yet to decide on Rondo’s option, but after trading for Dunn, it seems like there’s a chance this lineup above could change if they let Rondo walk. If they don’t, though, then Rondo will likely start with Dunn getting plenty of run at both point guard and shooting guard.

Non-draft update: Bulls decision on Rajon Rondo's option will not be made until next week.

The Bulls have set themselves up to begin looking toward the future with young players like LaVine, Dunn, Mirotic, Portis, Valentine, Zipser and Markkanen. Aside from that group, things could change quite a bit after the 2017-18 season winds down when Wade would likely wind up leaving. Lopez is under contract, so he’ll be around unless he’s traded, which seems possible if Markkanen winds up panning out.

It’s a full rebuild it seems in Chicago, and it seems that by the time this offseason comes to an end, the only veterans who’ll see serious playing time next season could wind up being Wade and Lopez. If Chicago’s front office wanted to start over and get a young core to work with, it’s exactly what they’ve done. 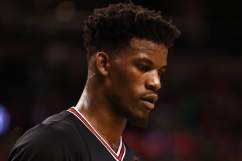