The Minnesota Timberwolves and Chicago Bulls have reportedly struck a huge trade in the early hours of the 2017 NBA draft. All-Star Jimmy Butler will be traded to the Timberwolves for the No. 7 pick in the draft, Kris Dunn and Zach LaVine, per The Vertical’s Adrian Wojnarowski.

Chicago is finalizing a deal to send Jimmy Butler to Minnesota for Zach LaVine, Kris Dunn and No. 7 pick, league source says.

To add on to that, 670 The Score pointed out that the No. 16 pick from the Bulls will also be sent to the Timberwolves.

The deal will reunite Butler with his old coach in Tom Thibodeau, and cannot be completed until the NBA signs off on it, which should happen almost immediately after the draft. With the deal expected to be processed, here’s how the Timberwolves roster will look, with the projected starting lineup having an asterisk.

That’s a pretty superb starting lineup. It will also be interesting to see how the Timberwolves utilize the No. 16 pick and what type of player they look to add. Butler immediately makes this roster look like not only a playoff team, but potentially a contender sooner than later.

Butler averaged 23.9 points, 6.2 rebounds and 5.5 assists per game last season with the Bulls, and was the type of player who could take over games when needed. The fact that he now gets to play with a dominant big man like Towns and an exceptional passer like Rubio should only help to get him even more open looks.

In terms of Butler’s contract impact on the team, he’ll be under contract through the 2019-20 season. He has a cap hit of $19,300,894 this coming season, over $20.445 million the following season and over $19.841 million the year after that, according to Spotrac. The Timberwolves have a young core but also have both Wiggins and Towns on their rookie contracts still.

With that said, Wiggins has two years remaining on his current contract while Towns has three, so the window for this team to grow together is pretty wide open. The addition of Butler was certainly big, and also sends the Bulls back into a bit of a rebuilding mode without having a clear-cut young superstar on their roster. 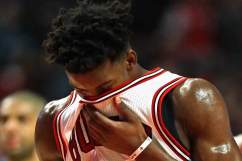