UFC commentator and podcast host Joe Rogan spoke today about the upcoming Conor McGregor vs. Floyd Mayweather Jr. bout, for the fist time since the fight became official (available above). Rogan was hosting his podcast, The Joe Rogan Experience, with stand-up comic, writer and actress Morgan Murphy when the discussion moved to the upcoming fight. Rogan also goes on to discuss the passing of former UFC heavyweight Tim Hague, who recently died after being knocked out in a boxing match this past Friday in Canada.

Rogan is a stand-up comedian, UFC commentator, television host, actor, podcast host and retired martial artist. He has studied karate, kickboxing and taekowndo. He became a black belt and is a four-time state champion and U.S Open champion in taekowndo. He started working for the UFC as an interviewer and has been a color commentator for many of its pay-per-view events and highlight programs since 2002.

“He’s the best ever,” Rogan said on his podcast. “You have to say he’s the best ever even if he never fights featherweight again. Why? Because he KO’d the best ever. The reality is Aldo’s the best ever but Conor KO’d him. You couldn’t say without the Aldo fight that Conor was the best ever. Because if you look at all the different people that both of them fought, your like wow it’s really close, it’s really interesting. Aldo has more fights. But once they actually fight, that’s it. That’s all that matters. It’s not MMA math. So you’ve got to give it to him.”

Rogan previously talked about McGregor vs. Mayweather back in March, before the fight was official: 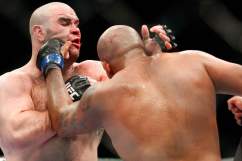 Tim Hague Cause of Death: How Did Boxer/UFC Fighter Die?