Here’s an animated @IceCube to lay down the game’s ground rules. See how it all goes down tomorrow night, 8p ET, only on @FS1. pic.twitter.com/xiXeYrDMZL

As the BIG3 League kicks off its inaugural season, there are a few things you need to know about how the league works. The format is simple. There are eight teams playing in a three-on-three basketball setting.

Unlike most pro leagues, the teams are not associated with particular cities. The league will function like a traveling rock band, playing in a new city each week. Ten different cities will host games including Las Vegas where the championship game takes place August 26.

The actual games happen on a half court, and the above video details all the important rules. Fans will notice there is no game clock, but there is a 14-second shot clock to help increase the pace of the game. The first team to score 60 points wins the game, but teams must win by at least two points. When a team reaches 30 points the game will take a break for halftime.

One of the most interesting parts of the BIG3 is the four-point shot, which Heavy goes into great detail here. The shot counts for four points if the player is touching any part of the circle. The rest of the game goes by traditional basketball scoring with two’s and three’s.

Just like in most pickup basketball games, teams must clear the ball on a rebound by going past the three-point line before starting their offensive possession. This does not apply to shots that do not hit the rim. The one exception to this is on steals the team who comes up with the ball is not required to clear it before scoring.

Teams do not want to pickup technical fouls. When a player is given a technical, the opposing team gets two shots worth two points each along with possession of the ball.

There are no personal fouls, so no one can foul out. There are team fouls, and after a team reaches five fouls per half the opposing team get two shots while retaining possession of the ball.

Got all that? The BIG3 has a detailed breakdown of every rule if you want to review further. All this should make for an exciting league, and a great way to spend the NBA off-season.

Don’t have time to watch all the games? Check out Heavy’s Week 1 spoilers with highlights, and the final scores for all four opening games. 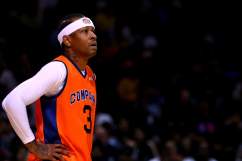