The World Series of Poker final table begins tonight at the Rio Convention Center in Las Vegas, Nevada. Michael Ruane was eliminated in 10th place on Tuesday, falling one spot shy of reaching his second consecutive World Series of Poker Main Event final table. Ruane was looking to join Mark Newhouse (2013, 2014) as the only players to reach back-to-back Main Event final tables since the tournament went to the former”November Nine” format.

All competitors are guaranteed a minimum of $1 million with $8.15 million going to the winner.

Scott Blumstein, an online poker player from Morristown, New Jersey, has a commanding chip lead in his Main Event debut.

“I can’t believe it’s real,” said Blumstein. “I have a great group of guys, and we’re going to get to work and prepare for one of the biggest moments of my life.”

Blumstein and 64-year-old John Hesp, who started in second-place, had more than half of the remaining chips in play between the two of them, but Hesp fell to fourth-place by the end of day 1.

Here’s how players stack up on Day 2:

Lamb was eliminated in 9th place after beginning Day 1 as the short-stack. He briefly moved up to 8th place, before going all-in with A9 suited against Jack Sinclair’s AQ. Sinclair’s hand held up, knocking Lamb out. Lamb took home $1 million for his finish.

On the 4th hand of the #WSOPMainEvent final table, Ben Lamb is eliminated in 9th place for $1,000,000. Jack Sinclair's AQ bests Lamb's A9

Sinclair was next to be eliminated. Sinclair shoved with KJ and was called by Brian Piccioli and his pocket aces. The aces held, knocking Sinclair out in 8th place. Sinclair took home $1.2 million for his finish.

Jack Sinclair finishes 8th for $1.2m when his shove with K-J is called by Bryan Piccioli's AA. (Credit @PokerPhotoArciv) pic.twitter.com/FI6VRl6vCb

Day 1 of the Main Event final table was originally scheduled to go until six-handed, but tournament officials decided to call it a night, and start Day 2 seven-handed. 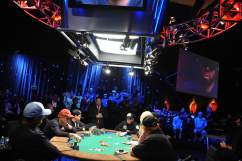