If you are not a fan of the New England Patriots, then I have some good news and bad news for you following the team’s 2017 preseason opener Thursday night versus the Jacksonville Jaguars.

The good news is that the team lost, falling 31-24 to Leonard Fournette and the Jags. Fournette, the team’s top pick in the 2017 draft and someone who hasn’t been all that impressed with the level of play in the NFL, finished with 31 yards on nine attempts and one touchdown.

The bad news is that it the Patriots may have found yet another scrappy, quick, short receiver to add to their already stocked wide receiver collection. Austin Carr, an undrafted rookie out of Northwestern, who signed with New England in May, had himself an impressive debut Thursday night. Carr pulled in 5 receptions for 44 yards, including a gymnast-like touchdown catch from Patriots’ quarterback Jimmy Garoppolo.

Austin Carr (@ayeseeme) TD. All 32 teams passed on him for 7 rounds. @Patriots went #Patriots, signed him right away pic.twitter.com/FMI7iODO58

After the game, Carr said that snagging that first catch was one of his main goal’s heading into the game.

“I was talking with the guys and I just wanted to get my first catch, my first hit, my first tackle and it’s all done now,” Carr said. “I twas tons of fun. I love this game.”

Now you can’t put a lot of stock in any preseason game, let alone the first one. If any of the four preseason games a team plays merits any kind of attention and/or reaction, it’s usually the third one. This first game is about as far away from the regular season as you can get and is typically a time for rookies, from high draft picks like Fournette to undrafted guys like Carr, to show they are worthy of roster spot.

So with that being said, Carr might have had a good night and that touchdown catch will make some noise, but the reality is that barring an injury or two, it’s going to be hard for him to make the team when it comes time for Bill Belichick to set his final roster. This Patriots team is deep across the board, but they might be the deepest at wide receiver.

Julian Edelman is one of the leaders of the Patriots, as well as Tom Brady’s favorite receiver

Those top three guys aren’t going anywhere. Cooks was brought over via trade from the New Orleans Saints and his explosiveness in training camp has already caught people’s attention.

Edelman is Tom Brady’s go-to guy and the team’s fiery heart and soul, while Hogan more than proved his worth during the team’s post season run last season, making one clutch catch after another. Hogan set a team record for receiving yards with 180 in the team’s AFC Championship Game win over the Steelers.

Amendola looked like his days in New England were numbered following their Super Bowl 51 victory, but he agreed to a sizable pay cut that all but ensures the team will keep him around. Like Hogan, Amendola is consistently clutch, making some of his biggest plays when it matters most. In the team’s improbable victory over the Falcons in Super Bowl 51, Amendola had 8 receptions for 78 yards including one touchdown. Amendola has also routinely shown his worth as a returner. 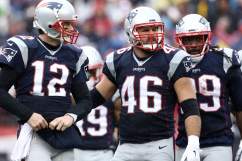 Malcolm Mitchell is the receiving corps resident young person, having been drafted in the fourth round of the 2016 draft. He had a solid rookie season for the Pats, collecting 32 receptions for 401 yards and 4 touchdowns. He also had a big night at Super Bowl 51, hauling in six receptions for 70 yards. His age would seem to make him possibly expendable, but Mitchell seemed to have gained Brady’s trust over the course of the 2016 season, something that has become a fairly significant barometer of a wide out’s success in New England.

Tom Brady Completes Dart to Malcolm Mitchell for 4th TD of the Game! | Patriots vs. 49ers | NFLQB Tom Brady can't be stopped as he tosses another touchdown pass, this time to WR Malcolm Mitchell! The New England Patriots take on the San Francisco 49ers during Week 11 of the 2016 NFL season. Subscribe to NFL: http://j.mp/1L0bVBu Start your free trial of NFL Game Pass: https://www.nfl.com/gamepass?campaign=sp-nf-gd-ot-yt-3000342 Sign up for Fantasy Football! http://www.nfl.com/fantasyfootball&hellip;2016-11-21T00:08:40.000Z

And Matthew Slater isn’t going anywhere. He’s the team’s “break glass in case of emergency” wide receiver, but most importantly, he’s their anchor on special teams. Slater has been a team captain since 2011.

As if those odds weren’t already stacked against Carr, you also have to factor in the role tight ends play in New England’s offense. They’re far more active than those on other teams and with Rob Gronkowski looking healthy and ready to roll teamed up with Dwanye Allen, who was brought over from the Colts, Brady will have more than enough options. Jacob Hollister, another undrafted rookie signed by the Pats, is also in the mix for a tight end spot and like Carr had a big night on Thursday, leading the team with 116 receiving yards.

It’s still early in August and a lot can change before the team opens up it’s 2017 season on September 7th. Carr may continue to show signs of progress and could demonstrate so much potential that Belichick decides to either carry seven wide receivers on the roster or cut one of those players who seem like a lock to make this year’s squad. There’s always the looming threat of injury, especially with someone like Amendola who has a rather checkered injury history, and that could factor into Carr’s fate as well.

In the meantime, you’ll always have Thursday night Austin Carr.

Read More
New England Patriots, NFL
Carr, an undrafted rookie for the Patriots, had an impressive debut in the team's first preseason game, but will it be enough to secure him a roster spot?