Showtime Sports has released the fourth and final episode of Mayweather vs. McGregor All Access. The series aired Friday’s at 10 p.m. ET on Showtime in the lead up to Saturday’s boxing match between the two superstars.

Showtime’s All Access “provides viewers with an intimate portrait of some of the most compelling personalities in sports. Far from limited to the fight game, All Access will take you inside the personal lives of the fighters and behind the scenes of the provocative and often edgy world of boxing with unrestricted access.”

Episode 1 primarily consisted of footage of the promotional tour and the war of words involving Floyd Mayweather, Sr. The Mayweather’s were dismissive of McGregor’s skills, while McGregor belittled Mayweather.

Episode two provided a look at the two fighters as they prepare for their Aug. 26 boxing match at the T-Mobile Arena in Las Vegas, NV. The episode begins with Mayweather boasting about how rich he is and shows him sorting a gigantic bag of money. The episode ended with McGregor and the controversial sparring sessions with Paul Malignaggi. The cameras were turned off for the sessions, but Conor McGregor claims Malignaggi “got his ass whooped.”

Leonard Ellerbe, CEO of Mayweather Promotions, recently spoke about a perceived lack of ticket sales for the event. Ellerbe said that the fight was on pace to break boxing’s live gate record from the 2015 Mayweather-Manny Pacquiao superfight($72.2 million) despite reports of slow sales.

“Right now, we have over $60 million in the box office,” said Ellerbe.

Last Wednesday, the Nevada State Athletic Commission approved the request from Mayweather and McGregor to wear 8-ounce gloves instead of the 10-ounce gloves the fight was scheduled for. 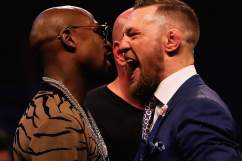