Getty Drew Brees and the Saints take on the Chargers in preseason action.

Yes, there are NFL games today for your viewing pleasure. Both NFL games on today’s slate will be broadcast on NFL Network. Technically, these games do not officially count as they are preseason, but they are important as teams look to make their final roster cuts.

The Atlanta Falcons take on the Pittsburgh Steelers at 4 p.m. Eastern on NFL Network. The prime time NFL Network matchup features the Los Angeles Chargers hosting the New Orleans Saints at 8 p.m. Eastern. Fans in the Southern California area could experience a blackout of the NFL Network Chargers-Saints broadcast. If so, you can watch the local broadcast on KABC.

Pittsburgh endured an up-and-down off-season with Ben Roethlisberger discussing retirement and Le’Veon Bell’s contract negotiations. Both players will play for the Steelers in 2017, but their future beyond that is uncertain.

The Steelers take on a Falcons team that has had to endure an off-season thinking about their Super Bowl collapse. Julio Jones will not play in today’s preseason game.

Tonight’s finale features two veteran quarterbacks whose teams have struggled in recent years. Drew Brees continues to be one of the best quarterbacks in the league, but it will interesting to see how the Saints offense flows without Brandin Cooks. The Chargers have endured an off-season of injuries, and face an uphill battle to start the season.

Week 2 of preseason action concludes on Monday, August 21 as the New York Giants take on the Cleveland Browns at 8 p.m. Eastern. ESPN will broadcast the Monday Night Football matchup. Preseason Week 3 will begin on Thursday, August 24 with two matchups including the Miami Dolphins and Philadelphia Eagles on NFL Network. 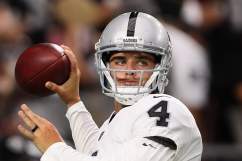 Read More
Football, NFL
The Steelers take on the Falcons while the Saints square off with the Chargers. Find out all the details on today's NFL football games.