The Buffalo Bills shook up the landscape of the NFL–and the fantasy football world–in a massive way on Friday afternoon, <a href="” target=”_blank”>trading Sammy Watkins to the Rams and acquiring Jordan Matthews from the Philadelphia Eagles.

We've acquired WR Jordan Matthews and a 2018 3rd round pick from the Eagles for CB Ronald Darby. pic.twitter.com/OQA1PfRET0

Prior to the trade, Matthews’ average draft position was 136th overall (late 11th round; WR51) in standard leagues and 128th (early 11th round; WR50) in PPR formats.

Going to the Bills should move him up draft boards.

Volume and opportunity are major factors in determining fantasy value, and Matthews gets an upgrade in that department. In Philly, Alshon Jeffery and Torrey Smith were both brought in during the offseason, Zach Ertz is a steady target at tight end, Nelson Agholor is still hanging around and rookie Mack Hollins looks like a legitimate talent. Though Buffalo isn’t exactly a pass-heavy team, Matthews’ major threats for targets at WR are 36-year-old Anquan Boldin and rookie Zay Jones.

The only problem. They’re all slot receivers:

Nevertheless, the opportunity to carve out a consistent target share in Buffalo is far greater than it would have been in Philly. Moreover, Tyrod Taylor is an emerging talent at QB, totaling 37 touchdowns, 12 interceptions and 7.4 yards per attempt over the last two years.

There are still some unknown variables that prevent Matthews’ stock from really taking off. There are targets available, but how will they be distributed? Can he learn the offense quickly? Or, more importantly, can he earn Taylor’s trust quick enough? Will he remain in the slot, or will he have to play a bunch on the outside, where he has struggled?

Ultimately, though, this is a player who has per-16 game averages of 78 receptions, 930 yards and seven touchdowns through three seasons. He’s entering his prime at 25, and he’s entering an upgraded situation from a fantasy perspective.

He has intriguing sleeper potential and should be considered right around pick No. 100, making him a late-eighth, early-ninth round target. 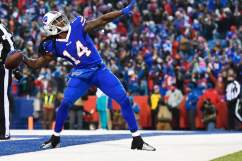 Sammy Watkins Fantasy Value After Being Traded to Rams