Here we are, right in the midst of fantasy football draft season, and the rankings have taken two massive hits in the span of 60 minutes.

First, Ezekiel Elliott, a consensus Top-5 pick, was hit with a six-game suspension. Then, less than a hour later, the Buffalo Bills apparently felt jealous of all the attention the Cowboys were getting, and thus shocked the world by trading star wide receiver Sammy Watkins to the Los Angeles Rams:

We've acquired CB E.J. Gaines and a 2018 2nd round pick from the Rams for WR Sammy Watkins and a 2018 6th round pick. pic.twitter.com/jssDP1sVBw

And, that sound you hear is Watkins’ fantasy value plummeting.

Before you completely remove Watkins from your draft board, remember that this is one of the most talented young receivers in the league. Despite battling injuries for a significant portion of his first three years in the league, he has per-16 game averages of 66 receptions, 1,063 yards and seven touchdowns. He can create separation in the middle of the field, but he’s also a truly dangerous deep threat, as evidenced by his career average of 16.1 yards per catch.

His 2015 #ReceptionPerception shows he can win at all levels. pic.twitter.com/kBSaVclOBg

Sammy Watkins' yards per reception rate over the last 3 seasons is the 4th-best in the NFL (min. 100 catches over that stretch). https://t.co/MfypwX9bxm

Watkins, who is healthy in the preseason for seemingly the first time in his career, looked like a prime breakout pick.

The upside is always going to be there for Watkins. He’s a supreme talent and he’ll be the clear No. 1 option in LA, and for those reasons, he can’t drop too far in your draft. But when you combine his injury concerns–nine missed games in his last two seasons–with the fact that he’ll be playing with one of the worst starting QB’s in the league inside an offense he has a couple weeks to get acclimated with, there is major risk mixed in with that undeniable upside.

Ultimately, Watkins becomes more of a high-end WR3 (late fourth-, early fifth round in 12-team leagues) rather than the mid-range WR2 he was with the Bills. 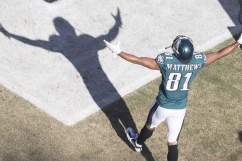 Jordan Matthews Fantasy Value After Being Traded to Bills

Read More
Fantasy Football, Football, NFL
In a shocking move, Sammy Watkins has been traded to the Los Angeles Rams. What does this mean for his fantasy value and 2017 outlook?