It was not the evening Florida State quarterback Deondre Francois had hoped for, and things got worse with just minutes remaining in the game. With a little over five minutes left, Francois was tackled by an Alabama defender then immediately grabbed his knee.

According to Tallahassee.com, Francois will miss the entire 2017 season. Francois suffered a patella-tendon injury, and could have surgery as early as Tuesday.

Francois was able to get up, but was not able to put weight on his leg. Francois is just a freshman but has already endured a number of viscous hits. The Seminoles offensive line struggled in 2016, and Francois took a beating. This highlight reel shows some of the nasty hits Francois took in 2016.

Here’s a look at some of the hits Francois sustained early in the Alabama game:

Noles-Tide live on ABC and streaming in the ESPN App. pic.twitter.com/nO3nd5lPua

While Florida State has not released the details of his injury, he did not return in the opener. After being helped off the field, Francois entered the medical tent. A few minutes later Francois’ leg was in a brace, and he was carted off the field.

Bad night gets worse for #FSU as Deondre Francois is carted to the locker room pic.twitter.com/jmDkqobsa3

Deondre Francois on crutches and getting on a cart to take him to the locker room. #FSUvsBAMA

J.J. Cosentino will likely take over the starting quarterback with Francois out.

Francois threw for 210 yards, but had two costly interceptions that contributed to the Seminoles 24-7 loss to Alabama. Florida State hung with Alabama in the first half, but major plays on defense and special teams allowed the Crimson Tide to pull away.

Despite not playing his best game against Alabama, Francois is one of the best young quarterbacks in college football. After losing to Alabama, Florida State has little margin of error the rest of the season. With Francois out, it puts a serious dent in the Seminoles’ title hopes.

Francois just left the X-Ray room. He's in a signicant amount of pain. He left shaking his head and grimacing. 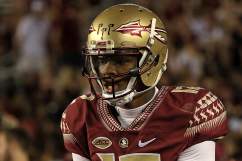