Deondre Francois could be headed to the NFL in 2019.

Deondre Francois’ play early in his career has fans thinking about how he projects to the next level. Given he is just a sophomore, Francois will not be eligible to declare for the NFL draft until 2019.

During his freshman season, Francois threw for 3,350 yards, 20 touchdowns and seven interceptions while completing 58.8 percent of his passes. He also rushed for 198 yards and five touchdowns. It is important to note Francois put up these numbers while playing behind a struggling offensive line as this video below shows.

NFL talent evaluators are already bullish on Francois as a future prospect. NFL Network’s Daniel Jeremiah explained on NFL.com what there is to like about Francois’ game.

I probably should’ve mentioned FSU’s Deondre Francois when listing the [top quarterbacks]. He has some room to grow as a passer, but I love his skill set and his toughness. I visited FSU a few weeks ago and it was easy to notice how much muscle he’s added in the offseason. He flashed some big-time throws and showed off his elusiveness as a runner during my visit.

Francois will have few bigger stages than Florida State’s 2017 opener against Alabama. While Francois has the ability to use his legs, his game shines the most when he displays his arm strength and accuracy from the pocket. Jeremiah explains what NFL scouts will be watching as he takes on a formidable Crimson Tide defense.

If he can lead the Seminoles to a win over Alabama on Saturday night, he will create momentum with Heisman voters as well as NFL evaluators. The challenge he’s going to face on Saturday vs. the Tide starts up front — the matchup in the trenches heavily favors Alabama. He has to get the ball out quickly and make great decisions. Alabama’s defense has proven it will generate turnovers, and when it does, it’s more than likely to score.

Francois is helped by a bevy of receivers to throw to including fellow NFL prospect Auden Tate, George Campbell and Nyqwan Murray. The last Florida State quarterback, Jameis Winston, has performed quite well since entering the league.

Seminoles fans could be watching another former Seminole on Sundays in a few years. Here’s a look at Francois’ top plays from his freshman season. 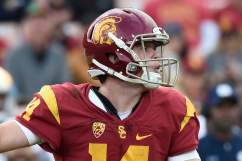