It is hard to find a more polarizing NFL prospect than Lamar Jackson. Jackson is one of the fastest quarterbacks in college football, but skeptics have questions about his ability to consistently perform inside the pocket. There are also concerns over his slight frame.

What NFL talent evaluators have to discern is the difference between perception and reality. Jackson may very well end up being limited in the pocket, but this belief should be grounded in his tape. With every highlight reel run by Jackson, it can help re-enforce the notion that Jackson cannot throw from the pocket.

Lamar Jackson is something special. Haven't seen a playmaker like this in college since Vince Young.

Jackson has the potential to wow NFL executives at the Combine. Louisville clocked the quarterback at a 4.34 40-time. This is an extremely fast time, and even more impressive for a quarterback.

Just because Jackson can run, does not mean he is not a capable passer. Take a look at Jackson stepping up in the pocket to drop a dime pass for a touchdown.

RSP Boiler Room No. 100: QB Lamar Jackson (Louisville)The RSP Boiler Room examines Lamar Jackson, a top quarterback prospect for the 2018 NFL Draft, and his skill for reading the field and negotiating the pocket. The videos posted here at the RSP Film Room are not hosted on this server and the original video content is not considered the property of the RSP…2017-07-18T01:19:59.000Z

NFL Network’s Daniel Jeremiah notes some of the same strengths and weaknesses in Jackson’s game.

Jackson primarily aligns in the shotgun/pistol, but he does take some snaps from under center. He shows quick feet in his drop and has an explosive/snap delivery. He can generate plenty of velocity without incorporating much of his lower half. He flashes the ability to accurately drive the ball into tight windows.

He has tremendous upside as a passer but his ability to make plays with his legs is what makes him special. He has Mike Vick-type explosiveness when he takes off on designed QB runs or scrambles. He gets up to top speed immediately and destroys pursuit angles from opposing safeties. He isn’t quite as shifty as Vick, but he is just as fast in a straight line.

Where he needs to improve: Jackson has a ways to go to develop into a consistently accurate passer. He has a bad habit of locking out his front leg, screwing himself into the ground and falling off throws.

In an interview with the Courier-Journal, CBS Sports Dane Brugler noted arm strength is not an issue for Jackson, but emphasized the idea that he will continue to be evaluated for his accuracy.

The NFL scouts are going to want to see, ‘OK, we know what you can do. But now can you get better? What’s your development not only with the passing game but mentally?’ Is he able to read coverages, be more accurate with the football?…

The biggest thing for him is his development as a passer – recognizing coverages, breaking down what defenses are trying to do pre-snap and post-snap and being consistent in the pocket. We saw flashes of that (in 2016). He just needs to do it more consistently from the start of the season to the bowl game.

Heading into the season, Jackson was widely viewed as a Day 2 or Day 3 prospect. Jackson has the potential to work himself into the first round conversation if he continues to show promise as a passer. As of now, Jackson likely goes in the second to third round if he declares for the 2018 NFL Draft.

The Checkdown brings you live, interactive fantasy football advice every Sunday morning from 10 a.m.. to 1 p.m. Eastern on Heavy’s YouTube channel. Rick Rosen takes your questions and helps you fill out your lineup. Watch it live right here. 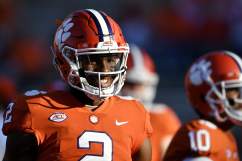