Getty Kelly Bryant is trying to ensure there is no drop off at Clemson without Deshaun Watson.

For years, Clemson fans enjoyed Deshaun Watson leading the Tigers to success the school had not seen in decades. While no one expects Bryant to replicate his predecessor’s success, there are high hopes for Bryant.

The junior quarterback sat behind Watson for two seasons. Bryant is a local product from Calhoun Falls, South Carolina. Rivals ranked Bryant as a four-star prospect coming out of Wren High School.

The importance of being a South Carolina native is not lost on Bryant. He spoke with the Independent Mail about the meaning of being a local player at Clemson.

“It’s been a long time since a South Carolina boy started [at Clemson],” Bryant told the Independent Mail. “It means a lot to put on for the home state. It’s really interesting. It’s something I can write down just to motivate me… I’m just going to take it and run with it.”

Bryant was the 11th ranked dual-threat quarterback prospect in the country, and had no shortage of interest from schools. In addition to Clemson, Bryant’s offers included Florida, Ole Miss, South Carolina and Virginia Tech.

Heading into 2017, Bryant had just 18 pass attempts. Bryant played in four games during the 2016 season.

This run shows just how much of a threat Bryant’s athleticism is for opposing defenses.

Despite little college football experience, Bryant has impressed to start the 2017 season. Bryant uses his legs as an added weapon, but has no problem throwing from the pocket as this 61-yard touchdown pass shows.

According to SB Nation, Bryant is so athletic he simulated Lamar Jackson in practice back in 2016. Now, he hopes to lead Clemson to victory over the Heisman Trophy quarterback.

Clemson includes a few fun facts about their new quarterback. Football runs in the family as his cousin is Pittsburgh Steelers wide receiver Martavis Bryant. Bryant is majoring in history at Clemson.

The Checkdown brings you live, interactive fantasy football advice every Sunday morning from 10 a.m.. to 1 p.m. Eastern on Heavy’s YouTube channel. Rick Rosen takes your questions and helps you fill out your lineup. Watch it live right here. 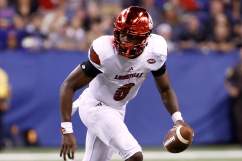