Arizona Diamondbacks first baseman Christian Walker may have had his life flash in front of his eyes during Game 3 of a National League Divisional Series against the Los Angeles Dodgers on Monday.

In an at-bat against Dodgers pitcher Yu Darvish, Walker looked as a 94-mph pitch headed directly toward his face. Fortunately, the ball barely missed his face and hit the brim of his helmet. Trainers went out to check on Walker, but he stayed in the game.

Watch a video of the scary incident below:

Back of the camera of @CWALK328 taking a Yu Darvish pitch to the head. He was ok. pic.twitter.com/umazQFn71t

Before the pitch almost hit his face, Walker had to get out of the way of another inside pitch by Darvish. The pitch ended up hitting the barrel of his bat and was challenged by Arizona manager Torey Lovullo, but it was upheld as a foul ball. The D-Backs were down 3-1 at the time, and Darvish was pulled after he hit Walker. But the D-Backs were unable to make anything of the baserunner. David Peralta followed by grounding into a double play, and a Ketel Marte grounded out to end the inning.

The Dodgers got up on the D-Backs once again with the assistance of rookie first baseman Cody Bellinger. The 22-year old got his team on the scoreboard with an RBI groundout in the first inning and struck again during the fifth with a solo homer to up the score to 2-0.

Arizona battled and cut the lead to one run, at 2-1, after a solo homer by Daniel Descalso in the fifth, but Bellinger flashed his glove with an amazing play to put an end to any rally.

The next inning, Dodgers catcher Austin Barnes added an insurance run by sending a solo homer to left field to put his team up, 3-1.

The winner of the NLDS game advances to play the winner of the Chicago Cubs and Washington Nationals series. The Cubs won earlier in the night to take a 2-1 edge in the series and look to close it out Tuesday in Game 4 at 5:38 p.m. Eastern. 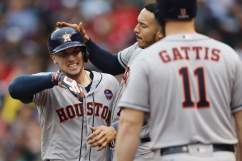 Houston Astros Advance to the ALCS: Who & When Do They Play Next?