The 2017-18 NBA season started on a somber note as Gordon Hayward sustained a fractured ankle in a gruesome injury in the opening matchup of the season. The injury was reminiscent of those sustained in previous years by Paul George and Kevin Ware.

The Cleveland arena immediately fell silent as team trainers attended to Hayward. He was carted off the floor in an air cast, and met with a standing ovation by opposing Cavs fans.

Here’s a look at photos moments after the incident courtesy of Getty.


GettyGordon Hayward’s ankle appears to be turned inside his shoe.

GettyKyrie Irving consoles Gordon Hayward as he is carted off the court.

This is a still image from the television broadcast. A word of caution, the image below graphically shows the ankle injury.

Gordon Hayward lands awkwardly on his left leg in the 1st quarter with his new team. Prayers for GH! pic.twitter.com/wjJoxKEYrU

The camera also captured Dwyane Wade praying for Hayward moments after the play.

Dwyane Wade’s reaction to Gordon Hayward’s broken leg is all you need to see pic.twitter.com/NPszxJhlxb

Jaylen Brown appears to be in shock after seeing the injury.

Gordon Hayward appears to have suffered a serious leg injury in the early minutes of the Celtics' season opener vs. the Cavs pic.twitter.com/q19pV8gqdT

Initially, many feared Hayward broke his leg, but the diagnosis centers around Hayward’s ankle. Kevin Harlan noted on the TNT broadcast Hayward had broken his leg. This was simply Harlan’s reaction moments after the play.

Hayward was flown via MedFlight to NE Baptist Hospital in Boston for further treatment.

Officials tell me Gordon Hayward is being flown via MedFlight to Boston. He will then be taken to NE Baptist Hosp in Boston. Our best to him

Based on how severe the injury looked, this would be good news in what was a horrific turn of events. It makes it even more disappointing that Hayward was not even a quarter into his debut with the Celtics. Hayward had spent his first seven seasons with the Jazz then signed with Celtics as a free agent over the 2017 off-season.

Here was some of the Twitter responses from athletes all over the country.

All the best to Boston’s Gordon Hayward. Heartbreaking to see such a great player injured that way. Speedy recovery. @gordonhayward pic.twitter.com/leBDQBgLqv

God bless you bro @gordonhayward ! ?? help him thru this god! 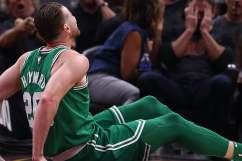