The Colorado Rockies are turning to right-hander Jon Gray for the 2017 National League Wild Card Game tonight against their NL West rivals, the Arizona Diamondbacks. The 25-year-old Gray is married to Jacklyn Gray and they celebrated their two-year wedding anniversary in August.

Here’s what you need to know about Jacklyn Gray.

1. Jacklyn Inspired Gray to Finally Get a Hair Cut for Locks of Love in April

May Good Luck Be With You Wherever You Go, & Your Blessings Outnumber The Shamrocks That Grow!#HappyStPatricksDay pic.twitter.com/alNhtFtbuh

Gray is known for his long blonde hair, which has grown out over the course of the 2017 season to its familiar length. It could have been even longer if he didn’t get his hair cut for charity in April. He donated his hair to Locks of Love, a non-profit organization that provides wigs for U.S. and Canadian children under 21 who suffer from hair loss because of medical conditions.

The Denver Post reported that Jacklyn and Gray came up with the idea to donate his hair to a good cause. However, she told the Post, “I was a little worried I wouldn’t recognize him” with shorter hair.

Gray said he was also a little worried about losing part of his identity and alter-ego, but he was happy to help children in need.

???EASTER???
The only time it's alright to put all your eggs in one basket!
•••
HE IS RISEN! CHRIST OUR SAVIOR! HE IS RISEN! pic.twitter.com/1ZbGYLkTos

In her spare time, the 23-year-old Jacklyn writes a blog called The Graytest Moment, although she hasn’t updated it since January 5, 2017. The posts on her blog give an insight into the life of a baseball pitcher’s wife, especially one who loves animals.

In one post, she wrote about their relationship. They started dating in August 2007 when she was 14 and he was a few months shy of his 15th birthday. “We were quite the talk of the town,” she wrote.

The couple married in August 2015, three months after they got engaged. She wrote that some people thought she was pregnant, but that wasn’t the case.

Home is wherever you leave everything you love and never question that it will be there when you return! #TheGraytestMoments pic.twitter.com/lkzM6WOSih

In another blog post, Jacklyn shared her love of pets. She often uses her social media accounts to promote Planet Pet, a “rescue boutique” in Denver where residents can adopt rescue animals. She has also shared posts from The National Mill Dog Rescue.

Jacklyn wrote that she grew up with cats, dogs, pigs, cows and hoses.

“I’ve always been the girl who wants to bring every animal home with me,” she wrote on her blog. “Since I can remember I’ve always had an overwhelming love for them. I even wanted to pursue a career as a vet until I reached the 6th grade. I couldn’t stomach the idea of having to Euthanize any animal! We’d always had some type of animal growing up.”

Gray and Jacklyn have adopted three purebred Yorkies and she considers herself a “rescue mommy.” “They are always kept current on all their vaccinations,” she wrote. “We visit our Doctor twice yearly to make sure. When they’ve become ill we spare no expense.”

4. Jacklyn Went With Her Husband on Amateur Ghost Hunts

Baseball players often have off-field weird interests, and some can even cause injuries. But Gray’s extracurricular activity is stranger than playing with drones. He told MLB.com in 2016 that he likes to hunt ghosts. He’s even taken Jacklyn with him, although she’s not as interested.

Gray said his interest in paranormal activity started when he was 10 years old. “I had an experience when I was younger that made me think: Maybe this is real,” Gray said. “I’ve investigated three times now and I haven’t seen anything, but just that one time. It made me a believer.” 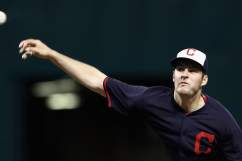 5. They Had to Get Married on August 21, Since it Was the Anniversary of Their First Date

Gray and Jacklyn’s wedding took place on August 21, 2015. It had to be that date, because it was the anniversary of their first date in 2007, Denver Life Weddings reports. They wanted to get married in Nashville, but Gray got called up to the Rockies earlier than expected. They always knew it would be troublesome since the date lands in the middle of the baseball season.

“After the Rockies called him up, he flew to Denver, I drove to Albuquerque to pack up all his stuff and drove it to Denver, our families met us there for his debut at Coors Stadium,” Jacklyn told DL Weddings. “Then I flew back to Oklahoma, packed up all of my stuff, drove to Denver, found an apartment in two days, unloaded all of our stuff, and realized, ‘Oh my gosh, we’re supposed to get married soon!’'”

They ended up having a small ceremony in the garden of their apartment building with their parents and their Yorkies in attendance.

“We were very relaxed and chill,” Jacklyn told the site. “So many people spend so much time planning their big fancy weddings, and we wanted to spend a lot more time thinking about our actual relationship. We wanted to focus less on this one day and more on the rest of our lives, as we began this new journey together.”