New York Yankees slugger Aaron Judge is off to an incredible start in his first full season in the big leagues. He hit 52 home runs in his rookie season, breaking the all-time record set by Mark McGwire. The 25-year-old rightfielder, who stands 6-7 and weighs 282 pounds, is a native of Linden, California, and the son of Wayne and Patty Judge.

Judge made his big league debut in 2016, appearing in 27 games after being called up in August. He was drafted by the Yankees with the 32nd pick of the 2013 MLB June Amateur draft after attending California State University Fresno. On July 10, he won the 2017 Home Run Derby in Miami, the night before making his first All-Star Game appearance.

Here’s is what you need to know about Judge’s parents:

1. Judge Was Adopted by Wayne & Patty Judge the Day After He Was Born

So blessed to be able to spend Mother's Day with my wonderful mother! Words can't describe what she means to me! #AlphaMom #HappyMothersDay #ILoveYou

Judge was adopted by Wayne and Patty Judge the day after he was born back in April 1992.

In a New York Post profile in 2015, Judge said he felt “blessed” to have a strong relationship with his adoptive parents.

“I feel they kind of picked me,” Judge told the Post. “I feel that God was the one that matched us together.”

Patty said that they feel more blessed than their son. “Both of our children are adopted. Aaron has an older brother, John, 29, who is teaching English in Korea, and we’re real proud of him, too. Really, it was all meant to be,” she explained to the Post. Wayne said there was a “miracle” when they adopted Judge.

“Being from California, it’s tough for them to make many trips out here, but it was a preplanned thing, so just great timing, I guess,” Judge told the New York Daily News. “They mean everything to me. They’re my parents. From all the love and support they gave me as a kid growing up, all the traveling to my college games, to my travel baseball games, I owe them so much and can’t even explain how cool it’s been for them to share this week with me.”

2. Judge Said His Respectful Demeanor Is Influenced by His Parents

As ESPN noted last year while Judge was still in the minor leagues, Judge often talks about the influence other people have had on his life long before he’ll talk about himself. He credits his respectful demeanor to his parents.

“I probably got it from my parents at a young age,” Judge told Fox Sports in May 2017. “They taught me right from wrong, how to treat people, treat them with respect.”

Fresno State coach Mike Batesole told Fox Sports that Judge is a “special, special kid.” “That can only come from Mom and Dad,” Batesole added. “When it’s that deep and that real, that means he was raised right.”

“I know I wouldn’t be a New York Yankee if it wasn’t for my mom,” Judge recently told MLB.com. “The guidance she gave me as a kid growing up, knowing the difference from right and wrong, how to treat people and how to go the extra mile and put in extra work, all that kind of stuff. She’s molded me into the person that I am today.”

3. Both Wayne & Patty Are Teachers & Urged Him to Go to College

So blessed to be able to spend Mother's Day with my wonderful mother! Words can't describe what she means to me! #AlphaMom #HappyMothersDay #ILoveYou

Judge’s skills during high school caught the attention of MLB teams, so the Oakland A’s used a draft pick in the 30th round of the 2010 first-year player draft to get him. But Judge passed on the chance to go to the big leagues. His parents wanted him to go to college instead. He attended California State University Fresno.

“Both of my parents are teachers, so they were big into the college thing. It kind of made my decision pretty easy,” Judge told MiLB.com in 2014.

“I felt like I needed to go to college,” Judge told the Tampa Bay Times-Tribune. “Not only on the baseball field, but off the field, I just didn’t think I was mature enough to face the real world yet.”

Wayne and Patty Judge are both retired schoolteachers. They taught in San Joaquin County, California, notes RecordNet. Aaron’s brother, John, also became a teacher and he teaches in South Korea. 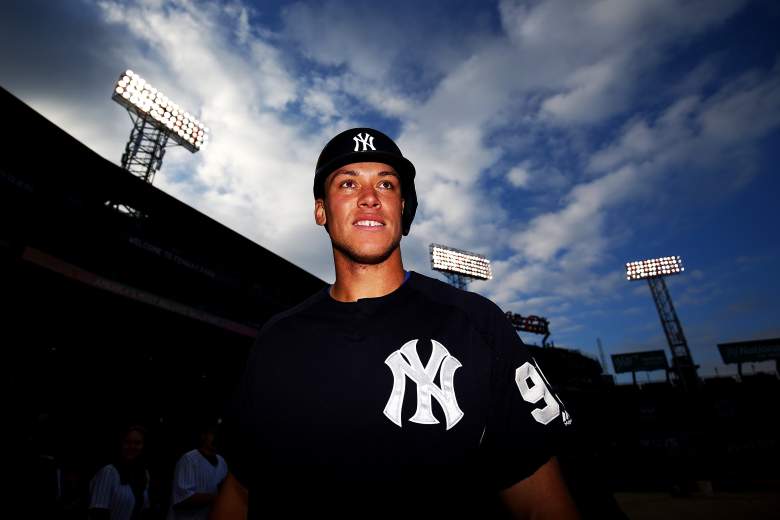 “I was about 10 or 11 and we really didn’t look alike, so I started asking questions and they told me I was adopted and answered all my questions, and that was that,” Judge said. “I was fine with it. It really didn’t bother me because that’s the only parents I’ve known.”

Judge never had any contact with his biological parents. He has not addressed his ethnicity publicly, although he learned at a young age that he did not look like his parents. North Jersey notes that he is bi-racial.

“I think it was like, ‘I don’t look like you, Mom. I don’t look like you, Dad. Like, what’s going on here?'” Judge told MLB.com. “They just kind of told me I was adopted. I was like, ‘OK, that’s fine with me.’ You’re still my mom, the only mom I know. You’re still my dad, the only dad I know.”
Wayne told the Post that they joked about their son as a baby, calling him the “Michelin Tire baby.”

“Some kids grow in their mom’s stomach; I grew in my mom’s heart,” Judge recently told Newsday. “She’s always showed me love and compassion ever since I was a little baby. I’ve never needed to think differently or wonder about anything.”

Judge told North Jersey that he sends flowers to his mother every Mother’s Day. He takes his mother’s delicious chocolate chip cookies back to New York with him after a West Coast trip.

Judge, who was raised in the small town of Linden, California, and his parents were invited to the New York Stock Exchange in December 2016 to ring the opening bell. The family also spent the day exploring the city.

Judge continued, “Especially here [at the NYSE], where there are a lot of Yankee fans. That’s been great so far. I’ve been meeting people, and saying hi, and it’s just getting me excited for next year.” 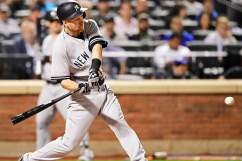 Yankees ‘Thumbs Down’: 5 Fast Facts You Need to Know