Getty Sam Darnold is under intense scrutiny, but still projects to be a top 2018 NFL Draft pick.

Sam Darnold, Josh Allen and Josh Rosen entered the college football season as the consensus top NFL quarterback prospects. As the season approaches the two month mark, all three quarterbacks have their fair share of questions. After Allen’s dismal start, it is now more of a two-player race between Darnold and Rosen.

Darnold’s propensity to throw interceptions, as well as his inconsistent play has caused even greater scrutiny on every throw he makes at USC. Darnold has nine interceptions this season, and has thrown two interceptions in three of his first six games. He is still completing 64.8 percent of his passes for 1,705 yards and 12 touchdowns.

MMQB’s Albert Breer spoke to one prospect evaluator who explained some of the concerns over Darnold.

He has a slight hitch, a wind-up in his throw, and he does stare down receivers. He’s still learning to read defenses. This is a young kid. Not ready for primetime yet. He has the tools, but he’s too inconsistent, and the hype doesn’t help him either. Overall, he has a lot of ability but he’s just not there yet.

Breer went on to explain Darnold has shown a propensity to force throws.

Third, Darnold’s forces throws. Scouts believe it’s happening more this year for three reasons: (1) he’s hyper-competitive; (2) he has a deep belief in his physical ability; and (3) with a young team around him, he knows he has to be really good.

Is there reason to be concerned about Darnold’s NFL ability? Yes, but not any more than any other NFL prospect. This year’s quarterback class was being dubbed the best we had seen in decades. We were quick to throw out praise this off-season, and the players have not been able to live up to the hype. However, this does not mean Darnold is not capable of leading an NFL offense. At 6’4″ and 220 pounds, Darnold still has most traits the NFL is looking for in its signal callers.

In Heavy’s most recent mock draft, we have Darnold as the top pick. While Darnold is far from locked in as the top pick, it is hard to imagine him falling past the first few draft picks.

The Browns, 49ers and Giants still remain winless at the bottom of the NFL standings. An argument could be made for two of these three teams to take a quarterback with their first pick. Even the Giants are not out of the question with Eli Manning showing decline over the last two seasons.

Bleacher Report’s Matt Miller also still has Darnold as the first pick in next year’s draft. Miller explains the pros for Darnold far outweigh the cons.

USC quarterback Sam Darnold has struggled at times in 2017, but he’s also playing with an injury-ravaged offensive line and with a relatively new supporting cast at wide receiver. Those might sound like excuses, but it’s important to know why Darnold’s numbers (12 TD, nine INT) are down compared to last year.

NFL teams will have to put those stats into context. Several of the interceptions were the result of dropped passes by his receivers, and Darnold’s completion percentage (64.8) is still impressive considering those drops. When you break down the film, Darnold tries at times to fit the ball into windows he doesn’t have the arm for, or he misses a defender and throws a bad ball. Overall, though, his accuracy and intangibles make him a potential early first-round pick given the demand for quarterbacks. 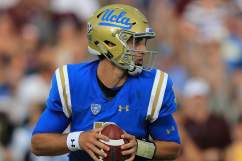