Cleveland Cavaliers star LeBron James is married to his high school sweetheart, Savannah Brinson. The two have a solid relationship that is built on mutual support, respect, and love.

Brinson, 31, is known for being notoriously private and doesn’t share much about her personal life.

“I do what feels right. I’m a very private person in general. With all the social media outlets, I feel like I have the choice to show you what I want to show you,” Brinson told Essence in a 2016 interview.

In recent months, actress Gabrielle Union (who is married to James’ teammate Dwyane Wade and is good friends with Brinson) chatted with Vogue about her girlfriend, describing her as a straight shooter.

“She’s a woman who really has that midwestern ethic. And I’m from the Midwest, so I know this. It’s that you say what you do and you do what you say,” Union told Vogue.

1. James Was Recently Accused of ‘Sliding Into a Woman’s DM’s’ Causing Some Cheating Rumors to Surface

An Instagram model by the name of Heidi Hoback recently shared a photo that she says is a screenshot showing a direct message that she received from the NBA star.

“A red headed, half naked white white woman is claiming that The King James slid into her DMs, offering to ‘teach’ her some things. She took a screenshot of the message and posted it to her snapchat, referring to LeBron as the ‘biggest Buck ever in her DMs,'” Bossip reported.

The site points out that it’s possible that this woman may have used Photoshop or another photo editing app to make up the story for attention.

Neither James nor Brinson have paid the rumor any attention, but social media is still talking about the alleged messages that Hoback says she received.

Check out some of the posts and memes that have been circulating on Twitter below.

@KingJames member that time you called Trump a bum? I'm sure your wife&family think you're a bum after trying to bang #HeidiHoback #KINGPOS

WTF! Lebron! Stop calling these hoes models. They out here ready to wreck your life! #heidihoback knows exactly who you are

2. Brinson Has Been James’ Support System Since High School

Before makeup tutorials and stylists? #WeCuteTho #Youngins #FlashbackFriday circa 2005 @kingjames

Brinson and James grew up in Ohio and first met while they were both in high school. They started dating when Brinson was just 16 years old. Now, well over a decade later, the two are happily married with three children.

Over the years, Brinson has been a major support system for her man. She has traveled all over the country with him (from Miami back to Ohio) and has been by his side through all of the ups and downs of his career and of their lives. Although James is often traveling, Brinson has made their relationship work and says that the support that she offers him is “part of his success.”

“I’m his support system with whatever he needs. If he needs someone to listen to him. If he needs to talk or if he says, ‘Hey babe, I’m tired. Can I take a nap?’ I will say ‘Yeah, baby. Take a nap,’ and keep the kids occupied. It’s a part of the role that I play as the mother of his kids and being his wife. The balance that I create in our house is for his success. He is very busy and I understand that, and the kids are at the age now that they get it. Being there for him is a huge part of his success,” Brinson told Essence in 2016.

Brinson got pregnant with James’ child during their senior year of high school. In fact, when the couple attended senior prom together, Brinson was five months pregnant. She welcomed her first son, LeBron Jr. on October 4, 2004.

The couple welcomed their second son, Bryce Maximus, on June 14, 2007. In 2014, Brinson found out she was pregnant again. She and James welcomed their third child, a daughter they named Zhuri Nova, in October of that year.

As for how Brinson is able to juggle her life as a full-time mom and a businesswoman, she has it on lock.

“There’s always a fear for moms if they are as present with the kids as much as they think they should be. You should never have a fear of doing what you really aspire to do or what you’re passionate about. You can prioritize and keep the balance. I have a good time with my kids. I love to turn on music and we all dance in the living room together. But you’ll never see me. I will not post me dancing,” Brinson told Essence.

The peanut butter to my jelly, ham to my burger, the apple of my eye, the King of my castle…….❤ #SoProudOfMyHusband #MushyPost #MCE

James proposed to Brinson on New Year’s Eve back in 2011. On Oprah’s Next Chapter, James talked about proposing to Brinson. He enlisted the help of his teammate Dwyane Wade, asking him to hold the ring box for him so that Brinson wouldn’t feel it on him.

“I was nervous. It felt like before a Finals game,” James told Winfrey about the special night. “I had been thinking about it, you know, for a while. But it just came to me one day I was like, this is a part of growth for me. And this is the lady, the woman I’ve been with through all the good and all the bad,” he added.

Check out part of James’ sit-down with Winfrey in the video below.

Brinson and James tied the knot in San Diego in September 2013. Their star-studded wedding included about 200 guests like Ne-Yo, Carmelo Anthony, and some of James’ Miami Heat (where he played at the time) teammates such as Dwyane Wade and Chris Bosh, according to HotHotHoops. The wedding was extremely private and had a strict “no phone or camera” policy, which prohibited people from sharing photos and other details about the couple’s nuptials.

5. Brinson Had a Huge 2016: She Turned 30, Christened a Goodyear Blimp & Started a Mentoring Program

#Repost @trippyluna Feeling like a million bucks for tonights All Star festivities! Thank you @laidthathair @thebrushmaven for making me feel amazing all weekend! Love you guys! Xoxo

Last year was one of the biggest years for Brinson. Not only did she turn 30, which is a fairly big milestone, but she also had a few other big reasons to celebrate.

Brinson was on-hand to christen Goodyear’s new Wingfoot Two blimp in Akron on October 2016. She posted about the experience on Instagram.

“So honored to be 1 of 4 amazing women to christen a Goodyear Blimp. I’ll be sending the new Wingfoot Two. Not sure if everyone is familiar but that blimp you see over all major sporting events, is based from MY hometown of Akron, Ohio. Among the names of Dr. Sally Ride, Robin Roberts and Amelia Earhart will be me! I am truly grateful to have been considered and this is a great mark in Akron history for my family and I. Many Thanks,” Brison wrote on Instagram in October 2016.

That same year, Brinson announced her new mentoring program, “Women of Our Future,” which launched this past March. The program began at with 16 students from Buchtel Community Learning Center, where she attended school.

“I wanted to start the ‘Women of Our Future’ program because I know the struggles and pressures a lot of these young women are facing during these tough high school years, and I want them to know they are supported every step of the way. I’m passionate about empowering and encouraging these young women because they are the future leaders of our community. I’m honored and excited to be in a position to work with them,” Brinson said of the project.

This is just one of the things that Brinson is involved in that is part of the Lebron James Family Foundation. 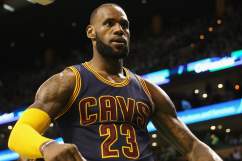